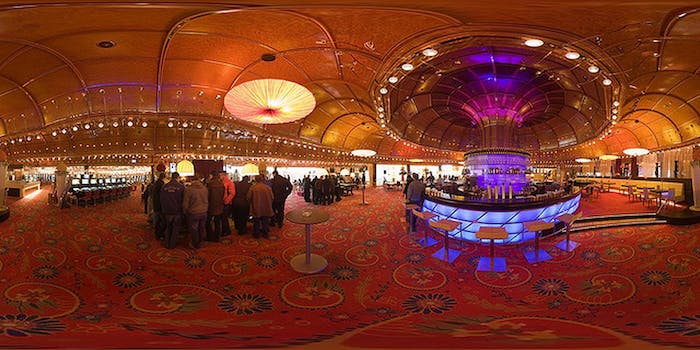 What gambling in a casino is like with Google Glass on

Chris Barrett had an eventful weekend in Atlantic City. The filmmaker wore Glass to three different casinos to try to get kicked out.

Chris Barrett had an eventful weekend in Atlantic City. The documentary film producer and PRServe founder, who recently used Google Glass to film an arrest, wore his specs to three different casinos to see what would happen.

Google Glass is, of course, banned in casinos.

Fortunately for Barrett, it seems people still don’t really know what Glass is or looks like, and the filmmaker was never thrown out on the street. The technology is banned from casinos by the state gambling authority as of last month, but on July 2, Barrett managed to play a few games at two casinos before a dealer at a roulette table in the third finally asked him what he was wearing. When Barrett told him, he was asked to remove the glasses. No harm, no foul.

Except there could be some foul. The device could be used to count cards or get playing information from others. The dealers and pit bosses seem to know that Google Glass is banned, but don’t fully know what it looks like. In the video, other casino-goers look at Barrett suspiciously, either because they know what he’s wearing or because they’re curious.

On YouTube, a fan suggests Barrett take Glass into a movie theater and see if he gets in trouble for filming. Risky!