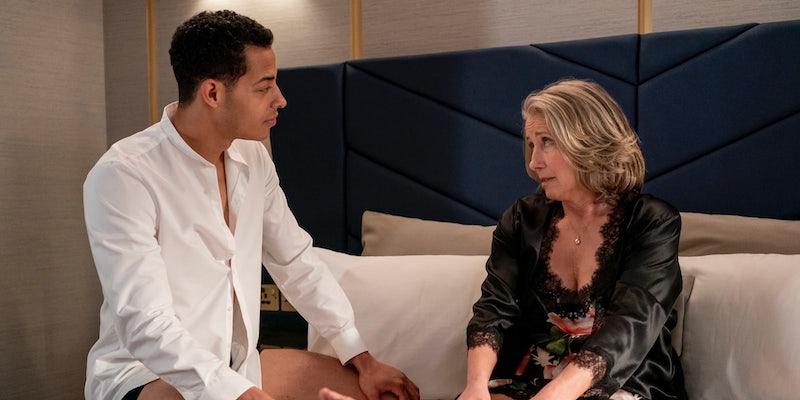 ‘Good Luck to You, Leo Grande’ is far more than skin-deep

Emma Thompson and Daryl McCormack star in this sex-positve two-hander.

Good Luck to You, Leo Grande is reminiscent of the kind of films that were being made during a pre-vaccine COVID pandemic. It’s an intimate two-hander almost set entirely in a single hotel room. Apart from the first scene and one toward the end, the entire movie rests on the shoulders of Oscar winner Emma Thompson and Daryl McCormack (Peaky Blinders). The longer we spend in the hotel room, the more claustrophobic it feels, making it harder to get distracted from the series of increasingly intense and raw conversations that lead to the gradual shedding of much more than their clothes.

Good Luck to You, Leo Grande

Release Date: June 17, 2022
Director: Sophie Hyde
Streaming: Hulu
A retired teacher hires a sex worker in an attempt to explore parts of herself that she never had the chance to after a lifetime of disappointing sexual encounters. Funny, poignant, and at times heartbreaking, it’s a marvelous two-hander boosted by its performances.

Despite all that looms large in Good Luck to You, Leo Grande—ranging from body image and the kind of harmful shame embedded in many people’s minds from childhood to sex work itself—it’s not a completely dour film. It’s often cheeky and clever, and the easy rapport between Thompson and McCormack that shines through, with the aid of Katy Brand’s script, results in a winning combo.

Would Nancy Stokes (Thompson) and Leo Grande (McCormack) have met under different circumstances? Probably not. Nancy is a retired religious studies teacher, and as a teacher, she assigned her students essays on the moral issues of sex work and shamed her female students for how they dressed because she thought she was helping them. Married for years with two children, she lost her husband a couple of years ago, but he was so indifferent toward her pleasure that Nancy, who is in her 60s, has never had an orgasm.

Nancy has a lot of regressive and preconceived notions about sex work—likely common opinions—and even after she hires Leo, she’s hung up on why someone who’s charismatic like him would need to be a sex worker and what kind of sob story he has that might have led to him doing it. She seems to want to get through her list of positions she wants to try to achieve some level of sexual liberation, but she dictates it in a matter-of-fact manner, wants to get it done as quickly as possible, and wonders if she can accomplish it all in one session. She’s a series of swirling contradictions, but Nancy’s layers, once peeled back, show the decades of damage to her self-esteem run deep, familiar territory to just about anyone who doesn’t “fit” into the small box they’re supposed to; Leo’s assertions that she’s beautiful does little to help.

Leo pushes back at her prejudices, telling her that he enjoys what he does and that “there’s nothing crass about getting paid for your work, Nancy. Trust me on that.” He loves what he does, knows that what he does can help people and make them happy, and he isn’t ashamed of it; sometimes, his line of work involves more than sex.

McCormack embodies Leo with confidence and charisma to spare, someone who’s attuned enough to his partner’s needs that he knows when Nancy needs to pause or talk through her conflict of emotions. At times, he almost doubles as a therapist as he walks Nancy through a self-esteem issue or self-deprecation, but he also makes her laugh when speaking of some of his other clients.

Across several sessions, Nancy and Leo both cling to their masks as fantasy and reality blur together and they reveal more to each other; Nancy’s mask is more apparent, but you can occasionally tell when Leo’s slips. Sophie Hyde’s (Animals) direction is introspective, making the room seem smaller and smaller until it they’re all that’s left. It can be uncomfortable, almost as if you’re eavesdropping on a conversation you shouldn’t be hearing, but it’s exquisite work in execution.

It’s a top-tier performance from Thompson, who brings a level of vulnerability rarely allowed for older female characters on the big screen (although they fare a bit better on TV) and bares her soul. McCormack, a relative newcomer, is more than capable of keeping up with Thompson, particularly when the tension between them comes to a head.

“I’ve never done anything interesting or remarkable in my life,” Nancy tells Leo. “This is it.” For us, it’s about as remarkable as it comes.

Good Luck to You, Leo Grande is now streaming on Hulu.