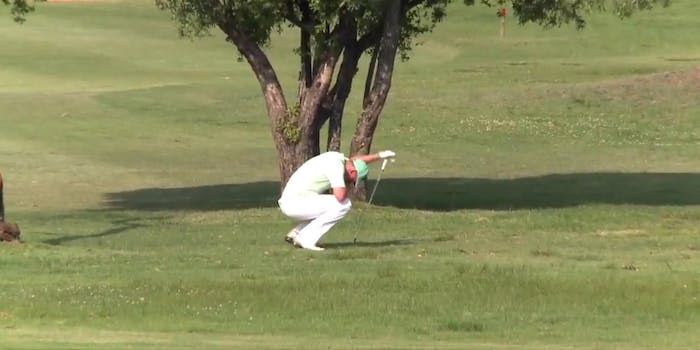 Golfer accidentally hits himself between the legs with his ball

During the first round of the Sunshine Tour’s Vodacom Origins, pro golfer Jacques Kruyswijk’s ball wound up next to a tree and he prepared to hit a simple escape shot.

From what I’ve seen of golf, this happens all the time, and it rarely results in groin injury. But when Kruyswijk swung, the laws of physics conspired against him, and the ball bounced off a tree and gnashed his crown jewels.

We've all made a 7 before, but it probably didn't hurt this much! @jakesgolf62 pic.twitter.com/IRp0rsIycA

Now, what are the odds of a ball ricocheting off a tree stump and hitting him in the nuts at full speed? Presumably they are very low. Clearly, Jacques Kruyswijk is the unluckiest man in all of South Africa, because this painful experience also occurred on live television, letting him relive it for the rest of his life.

The world watched in horror (and perhaps delight) as he fell to ground, clutching his gonads and groaning in agony for the little Kruyswijks that will never see the light of day. And as if stifling his fertility weren’t enough, Kruyswijk was penalized a shot for coming into contact with the ball, ultimately leading to a triple-bogey 7. He went on to tie the day at 18th place.

As we mentioned, he is the unluckiest man in all of South Africa. So, as a tribute to him, here is a compilation of the most painful ball shots in sports history.