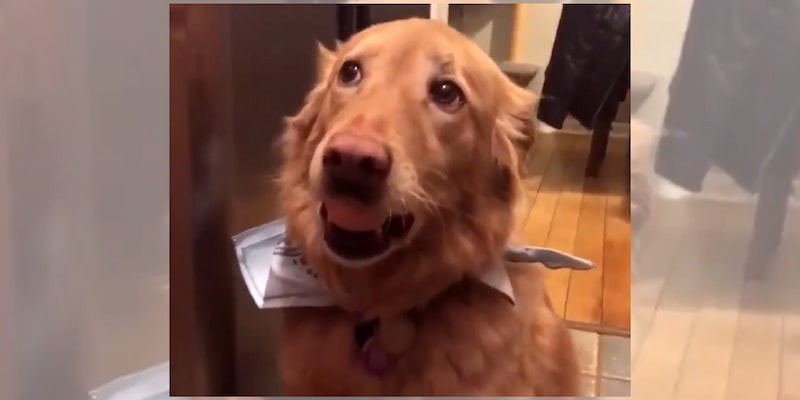 Can a golden retriever hold an egg in its mouth without cracking it? The topic has been discussed among dog owners on the internet for a while, and over the last several years, people have posted videos and photos to prove that the golden retriever’s “soft mouth” can protect an egg. But a viral video has made the egg experiment popular again.

Haley Bowers, who goes by the name “elizabeth gillies fan account” on Twitter, posted a video on Sunday of his aunt’s golden retriever holding an egg in her mouth. “[M]y aunt read online that a golden retriever’s mouth is so gentle they can hold an egg in their mouth without cracking it so she tried it on her dog and well,” Bowers wrote.

my aunt read online that a golden retriever’s mouth is so gentle they can hold an egg in their mouth without cracking it so she tried it on her dog and well pic.twitter.com/6SDyUI3v4j

The video seemed like just another silly dog video that would make the internet go “aww” before we all moved on to the next animal video. Instead, it skyrocketed on the social site, racking up more than 140,000 retweets and 450,000 likes. The video has been viewed more than 6 million times.

Bowers does not reveal the outcome of the egg experiment in the tweet, which is perhaps the reason why the video was so popular. In the video, the golden retriever takes the egg but looks very confused. Eventually, after a suspenseful minute, the dog drops the egg intact. Bowers told the Daily Dot in a Twitter DM that he was at work when the tweet went viral, and he was “floored” when he returned and checked his mentions.

In a follow-up tweet, he wrote: “make her famous this dog deserves the world.”

make her famous this dog deserves the world

The golden retriever, whose name is Sookie, actually has her own Facebook page. The page includes several other videos of Sookie performing tricks and balancing snacks on her snout. While Sookie is clearly a talented and very good dog, she wasn’t the first golden retriever to test out the egg experiment. Dozens of videos have been posted to YouTube showing golden retrievers holding eggs, and a popular post on Tumblr several years ago showed a photo of a golden retriever holding an egg. The Tumblr post went viral in a tweet in 2016, and then again last November, but it seems like many people missed it or forgot about it. Either way, we clearly needed a new video of a golden retriever successfully holding an egg in its mouth just to remind the internet that it really works.

The Tumblr post cites an Animal Planet segment as the source for the egg trick—and it actually exists!

In the video, author and animal behavior consultant Amy Shojai says, “They have what’s called a ‘soft mouth.’ I’ve actually seen these dogs pick up two or three raw eggs in their mouth at a time without breaking them.”

On Twitter, dog owners have been posting their own videos to test out their animal’s skills.

so the internet said golden retrievers are so gentle that you could put an egg in their mouths and they won't crack it and due to popular command cooper, my 2 y.o golden retriever decided to help me test it for science, enjoy pic.twitter.com/9EZfeyhOOC

Some people tested out the egg experiment on other dog breeds—with mixed results.

Hahahah after watching the golden retriever hold the egg in its mouth I thought I’d let Ellie try… and well… pic.twitter.com/go6NJlbFkq

We tried to put an egg in his mouth like the golden retriever, not the same pic.twitter.com/SMFlqbpjfU

Once you know your dog can successfully hold an egg, it’s up to you to figure out what to do with that information.