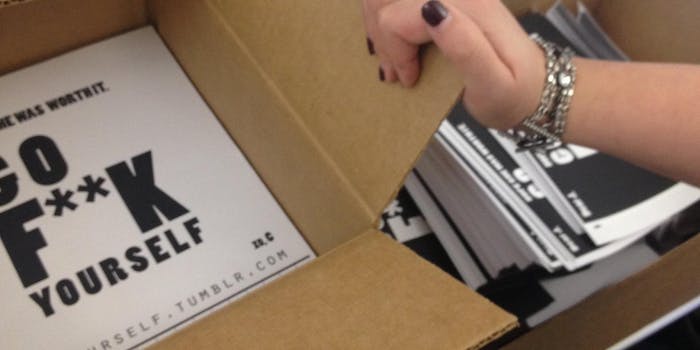 The true story behind Tumblr’s GoFockUrself

Another day, another marketing department-manufactured piece of nonsense.

Everyone who’s ever cursed the name of their no-good, cheating, scumbag ex could find some solace in GoFockUrself.tumblr.com.

The Tumblr blog operates as an ode to “J,” a crappy, terrible-at-texting dude who scorned the heart of “C.” In a craze of iMessage and Gmail screenshots and reaction GIFs, C tore this guy a new one, outing his stupidity and debasing herself to be “that girl,” an insane ex-girlfriend out for revenge. She did what so many of us wanted to do to our skeevy former paramours who in some way wronged us.

Matters escalated Wednesday when a full-page ad for the Tumblr hit Penn State Daily Collegian and then went viral on Reddit.

“A girl at my college got an entire page in our newspaper to advertise her Tumblr hating on her cheating ex,” the link read.

Anjali Krishnan, the Daily Collegian’s business manager, told me that the ad was taken out by Capitol Music Group, the major label behind a band called My Crazy Girlfriend, whose new single “Go F**k Yourself,” C refers to as “officially my fu*king jam” in one of the GoFockUrself entries. Subtle.

“Yeah I saw the ad, I had to approve it because it was kind of controversial,” Krishnan said. “It was weird because we got a call for the same ad awhile ago, but from a national agency. But when I tried to ask what it was for, they dropped it. Then we got contacted again by Capitol Music Group and it was for this.

“They also said they wanted to keep it confidential until [the ad] ran.”

And it appears to have had the desired effect. Redditor evg5017 (a Penn State student who is very real—I emailed with her—and has a legit Reddit paper trail) uploaded the post because she thought it was funny, and it indeed was met with general Internet delight and amusement.

Like so many things post-Twerk Fail, it was all just a little too good to be true: No boyfriend is that oblivious/sends that many unanswered text messages, and no spurned girl is so meticulous about tagging her broken heart so that it searches well on Tumblr. 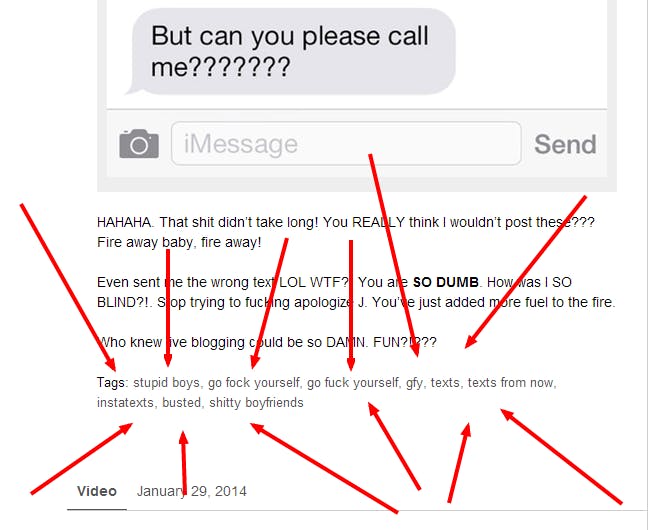 Another day, another marketing department-manufactured piece of nonsense.

This is everything that’s wrong with pop music in 2014, My Crazy Girlfriend is manufactured to be a one micro-hit blunder, relying on cheap vulgarity and viral marketing in lieu of actual talent or an original thought.

“Go F**k Yourself” is a truly terrible song, and I take no responsibility for introducing you to it. If you listened to that track for more than seven seconds, that’s on you.