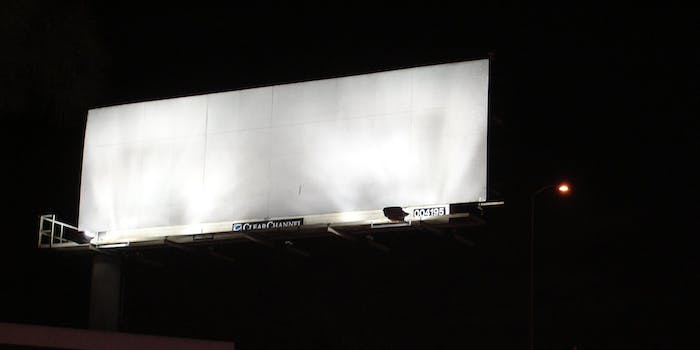 In the late ’90s, a clever prank was unleashed on the wilds of the Internet. Someone would post a link in a forum or email or AOL chat room. Instead of wherever the link purported to direct users, when they clicked the fateful button taking them to Goatse.cx, they got an eyeful of a naked man, bending over, using both hands to hold open his gaping butthole. The victim of the prank would close the page immediately, the image now seared onto their retinas, and the prankster would lol uncontrollably until a phone call interrupted their Internet connection—this was the late ’90s after all.

Last weekend, people driving through the intersection of Peachtree Road and East Paces Ferry in the Buckhead neighborhood of Atlanta, Ga., were hit with a bit of disgusting déjà vu after pranksters changed an electronic billboard there to display the famous Goatse image for hours.

A picture of the billboard in all of its Goatse glory can be found here. Warning: The photo is NSFW.

WSB-TV Atlanta reports that sight of the billboard caused at least one disturbed driver to call 911. “There’s an electronic billboard that is flashing a naked man,” one woman told a 911 operator. “It’s not actually an emergency, it’s just totally disgusting.”

A group going by the handle Assange Shuffle Collective took to Reddit last week to claim responsibility for the hack.

Both the FBI and the Department of Homeland Security have said they are investigating the incident. On Reddit, the hackers wrote they hid their identity by routing their efforts through seven proxies, which means they likely took far more security precautions than the billboard’s operators.

According to a series of tweets sent by security researcher Dan Tentler, figuring out how the hackers were able to display Goatse on the billboard may be considerably easier than figuring out their identities. Tentler posted that, prior to the Goatse attack, he discovered a serious security vulnerability in the signs—customers were operating them without changing the default password, making breaking in and causing trouble a snap.

oops, had to nuke the april 8 tweet. Here's a better sanitized one: pic.twitter.com/uqNpbLukO0

However, Tentler received a response from the company saying they were “not interested” in attempting to fix the problem.

It probably wouldn’t be a stretch to assume that the billboard company cares a little bit more about security now. Get it? Stretch? Like in the picture? Sorry.

This incident isn’t the first time that hackers have taken over an electronic billboard. In 2013, a pair of Serbian hackers used their smartphones to break the security system of an billboard in Belgrade and played a game of Space Invaders on the screen.