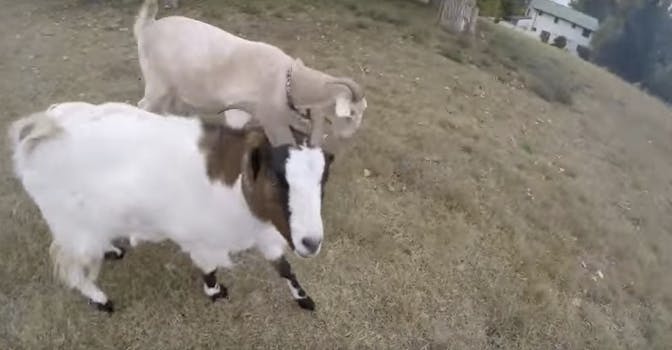 Screengrab via Gary The Goat/YouTube

Does this video look like it's worth fighting over?

The only thing more dangerous than an ill-tempered goat apparently is an angry man with a knife.

Police in Weymouth, Massachusetts, on Friday evening arrested Kevin P. Sullivan, 28, in connection with the stabbing of a 36-year-old man during an apparent fistfight, the Patriot Ledger reported. The crime in itself wasn’t so unusual, but the alleged motive was:

The victim’s girlfriend told police that Sullivan was angry at them because she had shared a video of a goat named Kevin on Facebook. The video “was about a goat named Kevin who was not nice to other goats in the video,” the report said.

That’s right: Dude got stabbed over sharing a goat video on Facebook. Just let that sink in for a moment.

The offending video in question was one of many popular YouTube clips shot by Jimbo, an Australian comedian who documents his adventures with a goat named Gary, a rather noble and loyal companion. Kevin the goat, by comparison, is so rude and aggressively violent that Jimbo typically refers to him as “Kevin the cunt.”

The human Kevin allegedly took the video of the dickish animal as “a direct insult” that “meant that he was a bad father,” the police report stated. Naturally, he followed Kevin the goat’s lead and incited a physical altercation, though it’s unclear if anyone was head-butted.

Neither party’s wounds were considered life-threatening (the victim was said to have wielded a “large wrench” in battle), so all in all, totally fine to laugh about this. Just be careful what you put in your feed.

And maybe steer clear of any mammal named Kevin.