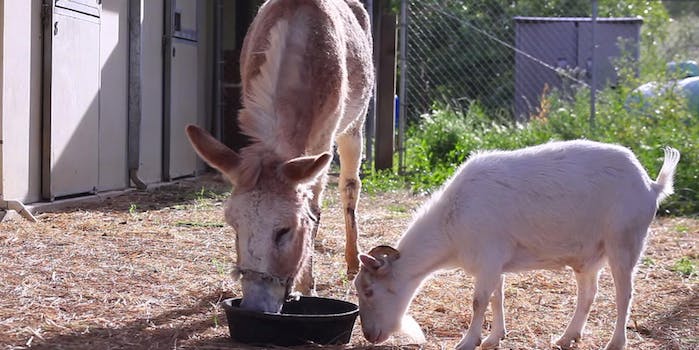 For 10 years, a goat named Mr. G and a burro named Jellybean lived in squalor due to a negligent owner and an animal hoarding situation. They were the pets “of a woman who could barely care for herself, let alone the dozens of dogs she hoarded and three barnyard animals,” according to Animal Place. Subsisting on little more than their unique friendship, the two knew at least they would always have each other. Hope came in the form animal rescue, but salvation was bittersweet as the two were taken to separate sanctuaries, each only able to take in one animal.

When Mr. G arrived at his new home, he became catatonic, wallowing in melancholy in the corner or his stall for six days. He refused to eat, mourning the loss of his dear friend. Having resorted to every trick they knew in an attempt to coax him out of his depression, the staff realized what they had to do. In hopes of salvaging the spirit of Mr. G, Jellybean was transported 14 hours to her new home thanks to a generous volunteer. What follows will delight you beyond words.

This decade-long friendship is one for the ages. Thanks to Animal Place, the two will never be separated again; they’re now permanent residents of the sanctuary.