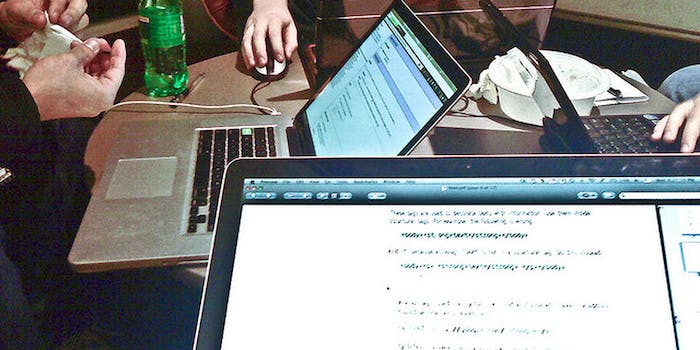 This Github post is the geekiest possible government shutdown joke

Github users claim they've been able to reproduce a bug in the government that causes it to shut down.

This viral Github post might be the geekiest government shutdown joke yet. Twitter user, developer, and programmer Dave Rupert has filed a bug report with the U.S. government on Github, a site for sharing code, reporting errors, and, apparently, complaining about the ongoing government shutdown.

I filed a bug with the @whitehouse https://t.co/Lf75PaCeR1

It’s basically a nerdy programming in-joke. Under the username “davatron500,” Rupert explained the “bug” in the U.S. government.

“I noticed a bug over the past week or so and it seems reproducible:

He’s using the typical language of a bug report to explain the government shutdown as a coding error, and it’s very funny to nerds, I promise.

“I’m unable to debug or propose a fix since there’s not an open, transparent stack trace. Conflicting error messages are being thrown as well.

Hope you can resolve this soon. It would seem that the U.S. Government would value 100% uptime in order to be a reliable and trustworthy source for the rest of the world.

Thanks! Love this project and would like to continue using it.”

And then, of course, the commenters get in on it too.

One writes, “I can confirm this is reproducible,” meaning he is having the same problem. Because we all are.

Then another writes, “Have you tried removing certain troublesome components and restarting?” and another adds, “Looks like new code added to the getter on healthCare() is causing some of the constitution tests to fail.”

That’s not what the Supreme Court said, but what do they know? None of the justices can even write Java.