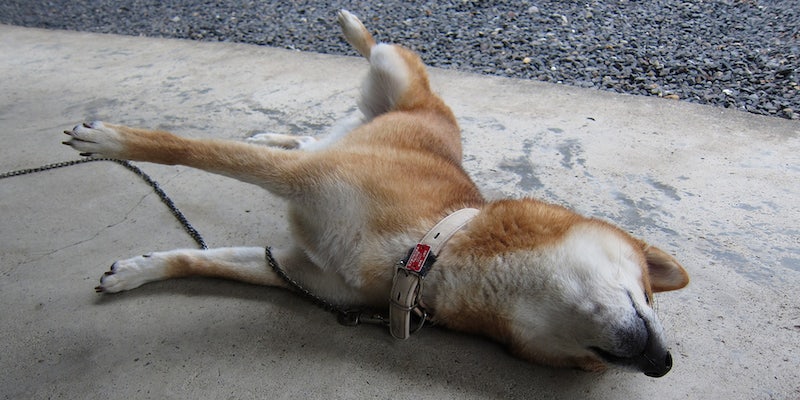 For a few sweet hours, Girls on a Map became Doges on a Map.

On the one hand, crowdsourcing is a great way to source tons of free content for your website. On the other, there’s a thin line between a crowd and a mob.

The dudebros at sexytime-vacation mapping site GirlsOnAMap must have thought they had the idea of a lifetime when they realized they could get their own users to upload pictures, locations, and other identifying information about various girls, and for awhile (a short while) it actually worked that way.

The site, designed as a sort of vacation planning tool for straight men looking for straight girls (as opposed to straight boys looking for straight women), asks its users to upload pictures of hot girls (“18+ only!” it says). It offers Facebook integration, for those who would rather steal women’s photos directly off their own profiles than upload them from their own computers.

“Connect with Facebook,” it trumpets, “so we can keep track of your ratings.” It also says “100% anonymous,” so I’m not sure how that works.

There’s a space to add your own tips about the woman and/or location, and then you pin it to the map, tail-on-donkey style. You can also vote in polls like “How down [tf] are the girls?” Currently there is nowhere on the map that has more than six girls listed.

The “Make money partying” section of the site is interesting. You can rent yourself out as a wingman or host a pub crawl for sex-starved touristbros where, presumably, you will use the Map to find the Girls.

So far, so douche.

Then one day media manager Jane Ruffino of Dublin infographic creator startup GetBulb noticed them and recognized misogyny in action. She saw an opportunity in the crowdsourcing, and she went for it, big time.

As detailed in a Jan. 17 article on Medium, Ruffino used Facebook to encourage her contacts to upload pictures of cute dogs in sweaters to the site, pup-bombing it and rendering it useless as a sex prospecting site.

Hi, this is the worst startup idea ever on the planet so far. Please help everyone on earth who is a human by uploading pics of cute animals in sweaters because I think we could at least turn it into a geolocated “puppy street style” thing.

DRESSED UP DOGS ARE WAITING AT THE PET DOOR TO GO FOR A WALK WITH YOU. CALL NOW

Because the site relies on submissions from the public, it was unable to detect or stop the inundation, and was soon awash in photos of—literally— hot bitches.

That’s when someone reached out to tell Ruffino that her own photo was on the site, and that she was ranked a mere 4.2.

I did not respond politely, nor should I have.

I mailed them and demanded that they take it down, and then my lawyer stepped in. The bros immediately tone-policed me on twitter, but I know when to pass things off to someone whose job it is to deal with them.

The founder gave Ruffino the old “I’m a feminist” routine, to which she responded by referring them to her lawyer. Her picture is now gone. In fact, according to the site, there are no girls in Dublin at all (although if there were, they would be moderately easy).

Once the tweets had flown, the other feminist pup-uploaders went into hyperdrive. For a brief, glorious period the “Hottest Girls in the World,” a row of pictures selected by software using the poll results, were all exactly the same picture of Doge, the world’s favorite Shiba Inu meme.

I bet they’d be down for some heavy petting.

In her article, Ruffino explained that she had no tolerance for self-labeled feminists who are responsible for “rapey bullshit,” and that the solution wasn’t for women and feminists to avoid misogynistic sites altogether; the solution was to mock those sites with their own weapons, exactly as the doggy initiative had done.

“It isn’t the rating system, it’s the way that they are trying to build a roving gang of sexual privateers and make it easy for stalkers and violent dudes to humiliate, frighten, or endanger women. Telling us to log off is basically telling us to stop existing.”

Ruffino says that in this case, the good guys won. The site, however, is still online, and still showing a number of pictures that are clearly taken from women’s Facebook profiles, presumably without consent. These photos are then provided to the users of GirlsOnAMap as sexual destinations, complete with tips and ratings out of 10. Once you add in the pub crawl service, you start to get something that looks like a one-stop shop for stalking.

Maybe someone should upload some guard dogs.