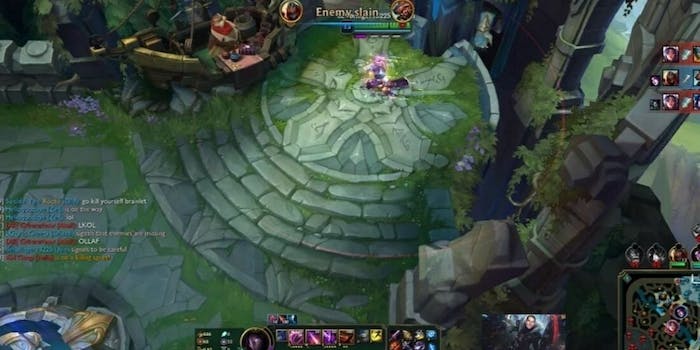 A small Twitch streamer has gone massively viral after a clip of him and his apparent romantic partner got into an argument during a broadcast about whether he had a Tinder account without her knowledge.

Twitch user hellbringer13225 was streaming himself this week playing League of Legends when, off camera, a female voice demanded that he “get off your damn computer now.”

From there, the conversation got tense.

Said the female: “You have a fucking Tinder?”

“Yeah, what’s this? That’s your fucking Tinder. ‘Always down a for a chat. Hookups are OK but not required.’”

“I don’t have a fucking Tinder.”

“Then, what the fuck is that?”

“How the fuck am I supposed to believe you when there’s proof right in front of my eyes? … That’s a photo from Okinawa, Steven.”

From there, the uncomfortable clip cuts off. But people on Reddit speculated how his partner discovered the apparent Tinder account and sort of defended him by talking about the marital affairs of Dr. Seuss and Albert Einstein. One person on YouTube commented, “This is incredibly sad. I can’t believe he would leave his team like that to go afk [away from keyboard].”

Some on Reddit claimed the streamer has a wife and two kids, but that hasn’t been confirmed. Others have claimed she is a girlfriend.

At this point, it’s also unclear whether the incident was real or staged. After all, the clip is still available to watch on hellbringer13225’s Twitch account. All we know for sure is that plenty of people have watched. Hellbringer13225 has less than 100 Twitch followers, but for this argument, nearly 150,000 people have seen the apparent Tinder betrayal.