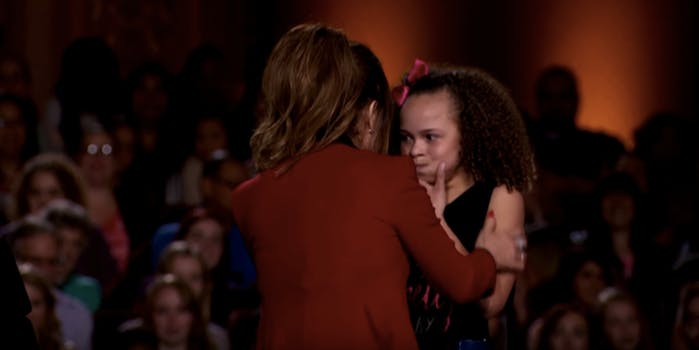 So You Think You Can Dance typically pits dancers against one another, but one contestant found herself battling with her stomach instead.

12-year-old Chi Tahani stunned the judges with her routine, set to Beyoncé‘s “Countdown,” and secured her place in the next round at the academy. She got lots of love from the audience, and judge Paula Abdul even said she was so proud of Tahani.

Chi then exited the stage to hug the judges, but once she reached the “Straight Up” singer for a warm embrace, Abdul hugged her just a little too tightly. The young dancer ended up vomiting on the pop icon.

But it looks like Chi is taking the unfortunate incident in stride. When asked what happened up there, she said that Paula “squeezed her too tight and all the happiness came out.”

That’s one way to set yourself apart from the competition.