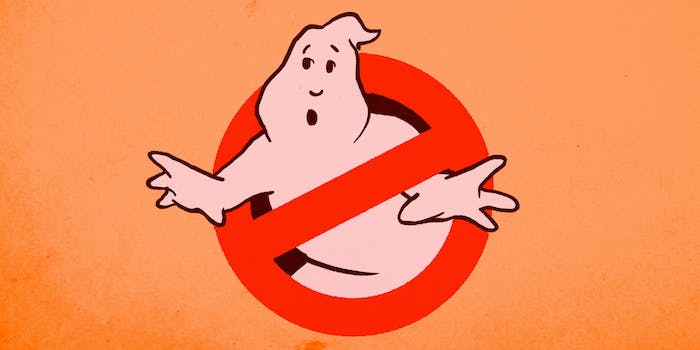 Please enjoy this bizarro review of ‘Ghostbuster,’ a film about lady-slime and body positivity

'The plot revolves around a woman named Ghost buster.'

Who is Ghost Buster, exactly, and why is this fat green woman sliming everyone you’ve ever met?

The review, which Catlin taped using a VHS video maker and then glued to a computer to make it go internet, starts with a question-and-answering session: “Are you no afraid of no ghost? I’m narm.”

It’s true. Were we none all not afraid of no ghost, none ghostbusting controversy would be made by pee-pants baby men who might just be afraid of woman ghost because they naturally produce slime there.

“Showing an overweight green woman blasting slime all over every single person you’ve ever seen in your entire life,” said Catlin, “Was a big step forward for body positivity way back when the film debuted in the ’80s.”

Catlin suggests that angry diaper men who “say that the casting of a female in the role of Ghost Buster is ruining their childhood” should hit rewind on their VHS decks and re-watch Ghost Buster with their body positivity glasses on. According to Catlin, the new remake of Ghost Buster—starring Kate McClintock, Missy McCarty, Lezzie Jones, and Kirsten Whigs—is so much better than the original that “there isn’t a single reason to not erase it from history altogether.”

I dunno about you, but I’ll be grabbing myself a glass of hot dogs and hitting the local movie house this weekend to enjoy a nice, steaming pile of Ghost Buster. Who knows? Maybe, like you, we can all not get slimed and feel good about our bodies—together. Lesbian innuendo and eyeball-winking included.

SEE ALSO: I watched the original ‘Ghostbusters’ for the first time