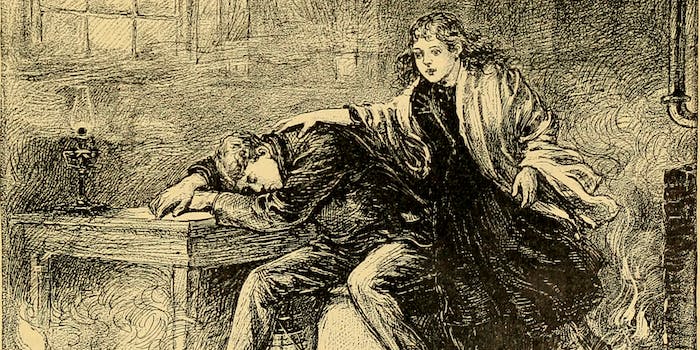 I have not seen the reboot of Ghostbusters. It comes out today in the U.S., though it’s been released in the U.K., and has so far been getting mixed reviews—much like one might expect of a big-name blockbuster.

However, for nearly two years Ghostbusters has been the source of a lot of drama because the remake stars four women as its ghostbustin’ team.

While the “all-women Ghostbusters remake ruined my childhood” club certainly isn’t the largest group of moviegoers, they sure are loud—and mostly men. And in anticipation of the film’s release this week, they have been acting up in particularly spirited ways.

IMDB currently has also over 10k ratings for the film, which, again has not yet been released. Over 50 percent of those ratings are one-star, and a look at the demographics shows an overwhelming number of the voters are men. 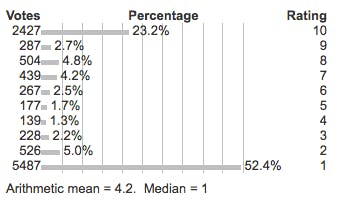 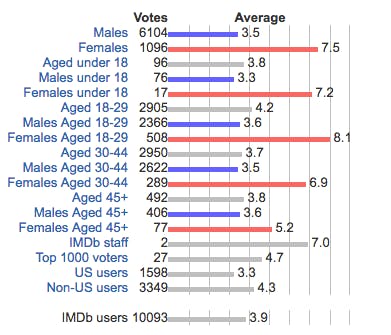 The 116 user reviews for the film come mainly from men as well, calling it a “man-hating mess,” “reverse sexism in a film,” and that “when your ideology discriminates against who you can cast in a role, that is called fascism, and it’s not a good thing.” One user who allegedly saw an advance screening reports [spoiler alert]: “All men are portrayed as fools in the movie, and in order to kill the final villain they have to shoot him in the crotch.” This is unlike the original film, when they say, “This bitch is toast” and shoot the villian, Gozer, with lasers they hold at their crotches.

According to writer Nico Lang (who reviewed the film for the Daily Dot) these gender-skewed ratings have been happening on other sites too, namely Rotten Tomatoes. “As of the time of writing, the film’s scores from female reviewers are considerably higher, with 84 percent of women giving the movie a thumbs up,” he writes for Salon.

For some men, the possibility that people could find joy in a movie that stars four women and a goofy hunk is too much. It can’t be real. This must go all the way to the top.

This is the theory one person posed on Reddit—with Sony paying critics for good reviews—and it has also popped up on Furious Fan Boys.

While most Reddit commenters seem to be roasting this theory, the original poster, Thjiiikkmmmmkkllllll (rolls off the tongue), posted their thoughts about the movie elsewhere on Reddit, saying it was “full of genuinely rude stereotypes.” Also, “they can kill ghosts now? You’re supposed to trap them.” Well, that crosses the line then.

3) General complaints that women are bad

Of course, lots of men, as seen on threads like this, just don’t like the film. Which is fine! We can and should criticize Hollywood’s tendency to make money off existing franchises rather than experiment with new stories, the writing, the direction, and the performances of its stars. It’s a piece of art and thus should never be immune from that criticism.

But given that so much of it comes from people believing “reverse sexism” is a real thing (it’s not), these reviews cease to become cultural criticism and instead turn into petulant whining.

“The only thing this pathetic remake did was to show the true agenda of the filmmakers,” writes one IMDB reviewer, “and it wasn’t to make a fun and action-packed blockbuster. It wasn’t to make a respectful update to a classic film. It wasn’t even to make an entertaining effort. It was a blatant gut-punch to males and those who loved the original film.”

Another review, however, sums up why this film has turned into such a lightning rod. The reviewer writes that Ghostbusters “should have been used to show cinemagoers and children and women and men that it’s OK for women to be leads.” And apparently it hasn’t.

When there’s a lack of representation in film—whether it’s gender, race, age, or anything else—the films that pick up the slack are put in the position to be representative of that entire group. If Ghostbusters is bad, it’s taken as proof that comedies starring women are bad, not just that this particular film was bad.

In turn, that puts many people desperate for more types of films to star strong, cool women to overly defend something they may not even like. One Reddit user quoted a comment supposedly found on the AV Club, in which a user admits feeling conflicted about reviewing the film. “I disliked the…media…but did like what it stood for. There’s a backlash about the ‘politics’ of the media, and that backlash is something I would like to fight against,” they wrote. “I just feel caught in the middle of delivering honest opinions about what I saw, and true to my overall thoughts about what believe.”

Art inspires feelings of ownership. It takes a big person to recognize that something that has deeply affected you has a life of its own—that it can change without your permission.