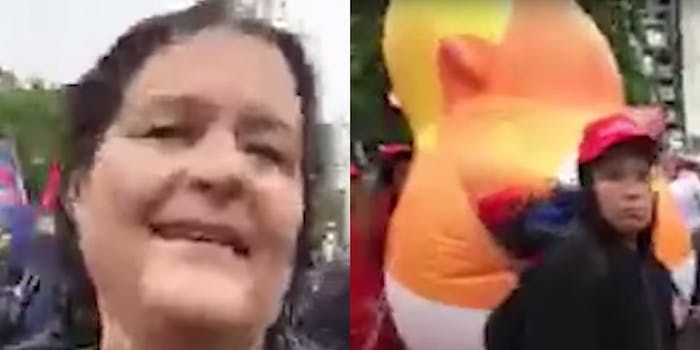 A far-right British activist known as Based Amy attempted to pop the baby Trump balloon and bloodied herself in the process.

The activist, whose real name is Amy Dallamura, live streamed both the stabbing and her own arrest on Twitter via Periscope. As she walks away from the scene, she can be heard saying “Yeah, baby!” in the style of fictional icon Austin Powers.

An avid participator in protests, Dallamura kept the camera recording up until she was arrested. The Periscope video shows an officer stopping and searching her, and then Dallamura is arrested for carrying the sharp object that she used to stab the balloon.

As she is being arrested, Dallamura can be heard saying, “America help me!”

The balloon was eventually patched up and reinflated. Meanwhile, Americans and Brits alike tweeted about Dallamura’s incident.

Many tweets referenced her bleeding hand, which Dallamura likely nicked on the instrument she used to puncture the balloon. User @trawlerhorse called her a “national hero” for attempting the pop.

“Thanks for taking that horrible insult down, you are a National Hero, Get that hand seen to though Darling,” @trawlerhorse said.

Good on you Gal !!
Thanks for taking that horrible insult down , you are a National Hero ,
Get that hand seen to though Darling xxxxxx#BrexitParty #BritainBitesBack

Other users tweeted their disbelief at how oblivious Dallamura was to both her own country’s strict knife laws and using her status as a disabled citizen to get out of being arrested. User @Nitemists was concerned about this and more, finding the whole situation “unf*cking believable.”

Many other replies to Dallamura comment on rights of property and whether it’s good practice to film crimes as they’re being committed.

“Why would you record yourself committing a crime,” @Dinwiddie_Jared asked.

Why would you film yourself commiting a crime?

And there was more than one half-joking assertion that Dallamura was using drugs.

Dallamura is known most prominently in the U.K. for being banned from going within 50 feet of the sea after costing British taxpayers over 1.2 million in rescues because she attempted to drown herself more than 50 times.