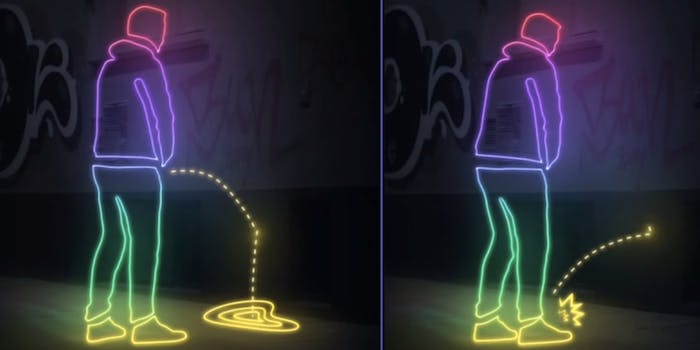 If you pee on this wall in Germany, it pees back

Community members in St. Pauli, a quarter in Hamburg, Germany, are fed up with drunk people urinating on their walls and sidewalks. In one of the most raucous districts for nightlife, attracting over 20 million visitors per year, things can get a bit, well, gross when men try and relieve themselves after hours.

So to curb the free-flowing urination that stinks up the neighborhood, the community decided to take things into its own hands: It covered the walls with superhydrophobic paint that repels all liquid. It’s similar to the paint used on ship’s hulls, City Lab explains.

On some walls, people posted signs warning people not to pee on them, but others remain blank but painted. Now, when some guy tries to urinate on the wall, it will splash back on his shoes.

A video describing the community’s “peeback time” posted by the city campaign states that fines and signs already posted have little to deter people that would rather pee freely, so the liquid-repelling paint was the next-best solution.

The signs posted throughout the city read, “Do not pee here, we pee back.”