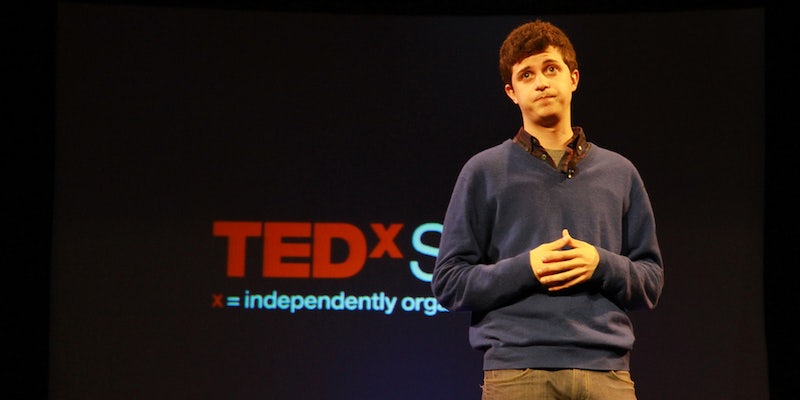 YouTube rapper George Watsky apologized to fans after his stage dive into the audience broke a girl’s arm and injured another on Sunday.

During his final song at the London stop of the Vans Warped Tour, Watsky climbed an estimated 40 feet up to the lighting rig. Many fans thought that it was part of the show until he jumped off the rig and into the crowd; the audience parted, and he landed on two attendees.

The show was halted as Watsky and the two audience members were taken away by an ambulance. A girl’s arm was broken, while Watsky had nicks and bruises; a man suffered from what appeared to be a muscle-related injury, but his diagnosis was less clear.

The rapper broke his silence hours later and wrote a lengthy apology on Facebook. Reassuring fans that he was fine aside from some bruises and shame, he took responsibility for his actions, which he called “a huge overreach in the heat of the moment” and not a result of being drunk or on drugs.

“The jump was not awesome, it was not badass, and it was not ballsy,” Watsky wrote. “It turned what should have been a great day for the people who got hurt into a nightmare. It was stupid and wildly irresponsible, plain and simple.”

Watsky stayed at the hospital for six hours after the incident in order to find out more about the concert-goers he injured. He plans to go back to the hospital and personally apologize to the man when he is able to see him.

Watsky called his actions inexcusable and felt terrible for letting down his fans, the Warped Tour, and the people behind the scenes.

“Putting your own body on the line is one thing, but putting other people in harm’s way is inexcusable,” he said.

Many fans have criticized Watsky for the stunt while praising him for his heartfelt apology.

“If you’ve ever been an irresponsible dumbass and are wondering how to properly handle the situation, take a cue from George,” Hank Green wrote.

Watsky still plans on making the remaining six performances of his tour, where he reassures his fans that he will not jump off anything.