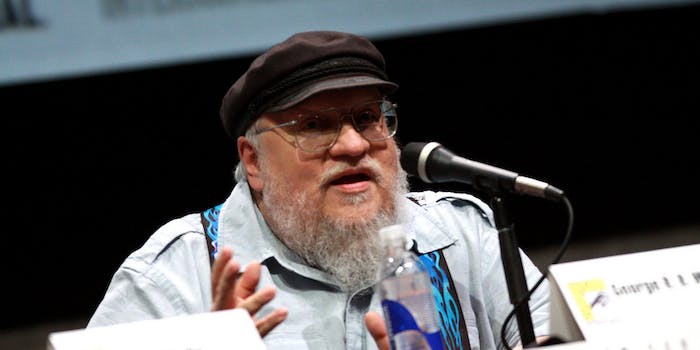 George R.R. Martin is already killing off his Twitter

Just go to his LiveJournal blog instead.

After years of primarily sticking to his LiveJournal blog, A Song of Ice and Fire author George R.R. Martin is giving another social network a try.

He quietly joined Twitter Monday without the usual fanfare that follows a Martin announcement these days. While some Game of Thrones fans may grumble that this is just another thing to distract him from writing the books, it’s doubtful they have anything to worry about.

He used his first (and only) tweet to promote his LiveJournal, which occasionally offers book and show snippets.

I don’t tweet all that much, please check out my live journal page. ;) #myfirstTweet

It’d be hilarious to imagine him trolling the Twitter accounts of his characters and the Game of Thrones cast (the latter which currently makes up the majority of people he’s following) like his many parody accounts do, but they probably already have the art perfected.

Especially when it comes to another author who rarely tweets.

As of press time he has yet to be verified on Twitter, but his publishers are quickly working to make that happen while assuring their thousands of followers that this is the real deal.

Just a note, folks: @GRRMspeaking is indeed George R. R. Martin! We’re working on getting him verified. Follow away!

Are you following a #GRRM impersonator? We can officially announce that @GRRMspeaking is the real deal (though he won’t be tweeting much)…

We could say Martin’s killing it, but 140 characters might be a little too limiting for him.