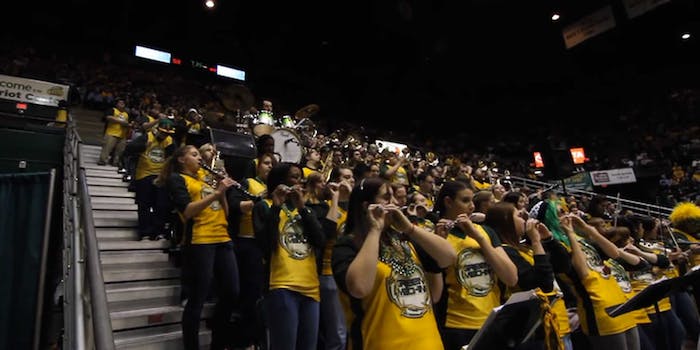 George Mason’s pep band takes on Rage Against the Machine

Your school's pep band was nowhere near this cool.

Zack de la Rocha never went to college and Tom Morello may have attended Harvard, but it’s the George Mason University Green Machine that’s channeling the spirit of their band, Rage Against The Machine.

The Green Machine is the school’s pep band and they’re renowned for having covered several popular songs over the years.

Even Bill Murray’s a fan.

Led by their instructor Dr. Michael “Doc Nix” Nickens, the band prepped a cover of Rage’s classic “Killing In The Name” before the 2011 NCAA tournament.

Check out the girl in the red T-shirt rocking out. I bet she was at the Rage reunion tour in 2007. I’ll admit I was a little disappointed when Doc Nix didn’t let fly a “F*ck you, I won’t do what you tell me!”

If the band’s playing songs like this, George Mason’s run to the Final Four makes perfect sense now. If I was in the game and I heard this song, I’d snatch a rebound, run the length of the court and 360 dunk on someone—opponents, teammates, it doesn’t matter.

Other people’s reactions to the rehearsal footage are just as strong; case in point, this comment on the video:

The Green Machine played the mash-up during the basketball team’s last home game (can’t get enough of that cowbell) and here’s the finished product unveiled on a national stage at the CAA tournament, complete with genuine rocker yells: