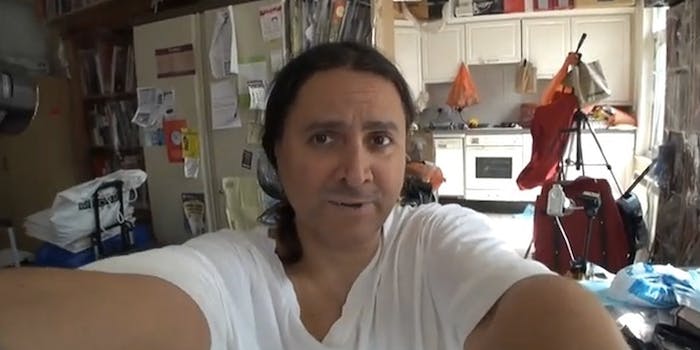 A class action lawsuit is brewing against YouTube for “unfairly” removing channels and videos that the company believes violate its Terms of Service agreement.

A class action lawsuit is brewing against YouTube for “unfairly” removing channels and videos that the company believes violate its Terms of Service agreement. The suit is led by controversial YouTuber George Godley (a.k.a. “GeoGodley“), n response to YouTube’s removal of his channel after many of his videos were flagged for inappropriate content.

In the colorful and unhinged FAQ on his website, Godley admits that people tell him he “makes women uncomfortable” and rants against vloggers who don’t work half as hard as he does but yet get promoted by YouTube “for nothing.” Blogger HappyCabbie, who was asked to join the suit via Twitter and wrote a post about it, writes that Godley thought he’d be interested in joining his class action suit against YouTube because he has also had videos removed.

Though HappyCabbie lists many reasons why he can’t join Godley’s crusade, he says Godley is in a different position than he is: HappyCabbie understands why YouTube banned him, but Godley does not believe the termination of his own account was justified.

So far, Godley is suing YouTube for Fraud, Breach of Contract, Gross Negligence, and Intentional Infliction of Emotional Distress. It’s another example of a YouTuber feeling censored by the site’s community guidelines, like what happened last month when popular and controversial YouTuber the Amazing Atheist listed all the videos on his channel that YouTube deleted — many of which including anti-feminist rants and commentary on Islam.

In a post on his blog, Godley says the URL that used to go to his channel that “now reads that his account was terminated for violations of the community guidelines and/or copyright infringement” is not only defamatory but also libelous.

This is one of videos that got Godley in trouble, which he’s reposted on DailyMotion:

In it, he flirts with three Romanian women who are sunbathing, filming them and taking photos when another woman comes up and tells him to get away. Godley describes the woman as a “cockblock” and a “psycho bitch.” The video is controversial and in line with other flagged videos where men approach random women, such as the Simple Pick Up channel “Massaging Random Girls” controversy and last week’s “Sweeping Women Off Their Feet” viral video.

Godley, who is based in London, has a long history of being flagged on YouTube and is notorious for his over the top antics—including commenting on people in public for his channel and flirting with women using his camera. He also appeared on The X Factor with an embarrassing singing audition that left Simon Cowell’s jaw on the floor.

HappyCabbie wrote that in his opinion, Godley’s video on the beach was flagged for “curse words.”

“The other thing to avoid is name calling in the title of the video. Does this mean that the video deserved to be flagged? In of itself I would say no,” he wrote. “Had a more appropriate title been used the video and perhaps his channel may have survived. However you have to be very careful when picking a title for your videos.”

Below, Godley explains why another video he posted of an “ugly” tattoo on a stranger in public was flagged and removed.

In his posts, Godley often includes scores of videos more “sexual” or “inappropriate” than his own as examples of YouTube’s hypocrisy. He ends his latest by asking “anyone wrongly terminated by youtube, especially contracted / network partners” to contact him about a possible class action lawsuit.