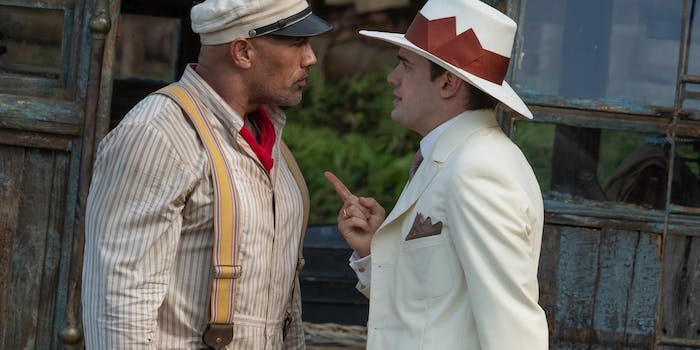 For what now feels like the hundredth time, Disney has introduced an allegedly groundbreaking gay character in one of its blockbuster releases. Jungle Cruise features British actor Jack Whitehall (who is straight) in a secondary role as McGregor, the brother of Emily Blunt’s co-protagonist. However, his coming-out scene sounds almost comically circumspect, echoing the subtle nature of other queer Disney characters.

According to Variety, McGregor tells Dwayne Johnson’s character that he broke off three engagements with women because his “interests happily lay elsewhere.” He also explains that his sister (Blunt) supported him when other people disapproved of who he loved. The scene avoids using explicit language to describe McGregor’s sexuality (ie. the word “gay”), and frames the story around the reactions of straight people: McGregor’s sister being praised for her positive reaction, versus other family members who ostracized McGregor.

Over the past few years, Disney’s run of “gay characters” have become something of a punchline among queer moviegoers. Beauty and the Beast’s LeFou and Cruella‘s Artie both received a lot of media attention and were touted as a progressive move in Disney’s PR messaging.

However, these characters were sidekicks whose sexuality is only discussed in oblique terms, allowing them to be overlooked by viewers who weren’t clued in. Jungle Cruise‘s style of a coming-out scene also leaves the door open for the film to be edited for overseas markets, if local censors object to more obvious expressions of queer identity. It certainly doesn’t sound like McGregor’s sexuality is baked into the role.