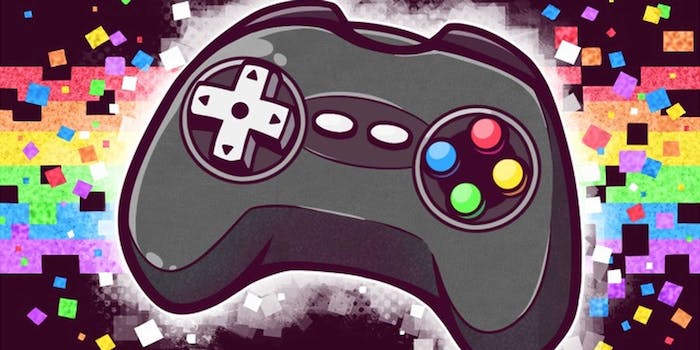 You don't have to be a straight, white male to love video games.

The stereotype that gamers are all straight, white men is slowly changing as other members of the gaming community risk criticism and harassment to make their voices heard. A new Kickstarter-funded documentary focuses on one group not often in the spotlight: queer gamers.

Gaming in Color will explore the queer side of the gaming community and shed light on the challenges LGBT gamers face.

“For too long gamers have been painted in a very specific light, and the mosaic of gamers have lacked the diversity of minorities, queers, women, and members of LGBT communities,” the project’s organizers wrote on Kickstarter. “We want to create this film in order to take a closer look at the challenges and the growth of these communities in the gaming world.”

“We all have our own personal reasons why gaming is important to us, and our goal with this project is to bring a voice to those stories, not just to hear what others have to say but to let others know they’re not alone. That there’s a strong community of people out there with amazing stories that need to be told,” director David Gil said.

The documentary will highlight the bullying many LGBT members of the gaming community face at the hands of fellow gamers, and how few video games deal with or even recognize queer issues.

When producer Anne Clements first started investigating the gay gaming community, she was surprised by how large a subculture it had become and how much bullying queer gamers face, both online and in real life.

“If kids are having trouble in school and are being bullied, they tend to focus on games to escape, but now online games have become so interactive that they can go on there and get bullied too,” Clements said.

Last August, another Kickstarter campaign raised over $91,000 to run the first LGBT gaming convention, GaymerX, which will take place August 2013 in San Francisco. The convention will focus on issues important to LGBT geek culture. Matt Conn and Kayce Brown, founders of GaymerX, were interviewed for the Gaming in Color trailer and invited to take part in the documentary.

“I hope that young people can watch this film and if they are queer or questioning, that they realize that hey, there’s nothing wrong with being a gay dork or a lesbian…There are thousands upon tens of thousands of other people out there just like me and that there is nothing wrong [with that] or that they aren’t alone,” Conn told the Daily Dot.

According to Brown, the current climate makes it especially hard to be a gay gamer. Within minutes of logging onto a game server, you can hear insults and slurs that make LGBT gamers feel like they can’t be themselves. The bullying and harassment isn’t just within the gaming community, though. It’s also sometimes uncomfortable for gay gamers to admit to non-gamers in the LGBT community that they’re geeks.

“It’s like you’re coming out of the closet twice, first that you’re gay and then that you’re a gamer,” Brown said.

Conn admitted that if there had been a growing community for gay gamers like there is now, it would have helped him come out of the closet sooner, because he would have known there was a community supporting him.

But as the LGBT gaming community has grown and become more vocal, queer gamers have drawn attention and criticism from those that don’t want to see the culture change. GaymerX has been the focus of a Westboro Baptist Church video and has even been attacked by other gamers.

Both GaymerX and Gaming in Color have been accused of trying to segregate the gaming community, but they see their mission as precisely the opposite.

“When it comes to gaming, be they gay, straight, men, women, black, white, etc a player is a player. What we want to do is portray the struggles that people have gone through just to try and be treated the same as everyone else within the gaming sphere,” Gaming in Color’s organizers wrote.

Conn and Brown of GaymerX both argued that their project isn’t segregating the gaming community, because they’re not excluding other gamers from their activities. They are just pushing for more acceptance and tolerance of queer themes in gaming culture.

“We should be able to get to the point where treating people in a game is a matter of common courtesy, and that words like faggot are not thrown around as common nouns and accepted as normal,” Conn said. “I want to get to a point where I know I can log in to any game and be openly gay—and by that I mean, casually mention my boyfriend is in the room—and not be harassed or banned or sent nasty notes or worse.”

Clements was disturbed by the number of Internet commenters attacking Gaming in Color by asking “Why do they need their own documentary?”

“I think we’ve come so far in gay culture in general but there’s obviously still a lot of homophobes and people scared out there,” she said. “I don’t see the harm in there being a documentary about gay gamers out there. If you don’t want to watch it, just don’t watch.”

The hostile environment and casual homophobia of online gaming aren’t the only challenges LGBT gamers face, though. They’re also fighting for representation in the games they play. Straight male game fans may take it for granted that the heroes of their games will look and act like them, but queer characters are still few and far between in mainstream, big-budget titles. 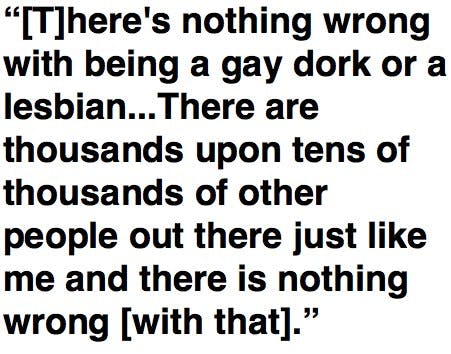 And when they do appear, they’re extremely controversial. When BioWare let players of the 2012 blockbuster Mass Effect 3 choose same-sex romances, the company was hit with a massive onslaught of homophobic comments and negative reviews. The same story played out earlier this year in Star Wars: The Old Republic.

“It feels like gaming, which should be at the heart of exploration and the forefront of rights, is still back in the early ‘90s, just barely getting used to the idea that they won’t lose customers if they allow users the option for a same-sex relationship,” Conn said.

“We know it’s extra dollars to include other choices,” added Matthew Brown, another gamer who appears in the documentary, “But those choices mean the world to us.”

Clements said she hopes to have Gaming in Color wrapped up by September, in time to submit it to the Sundance Film Festival.

With the release of the documentary and GaymerX taking place in the summer, Brown hopes game companies will hear the LGBT voice and start to include more choices within their games, so that men can rescue a prince and women can rescue a princess if they want to. Clements wants the documentary to show companies that there is an audience out there for games incorporating gay culture.

Whether or not companies take notice, Clements hopes the documentary will touch people of all different backgrounds.

“If you’re straight, gay or bisexual, from Los Angeles, New York, or a big city or the Midwest, hopefully you’ll find some heartfelt stories to follow,” she said.

Photo via Gaming in Color/Kickstarter