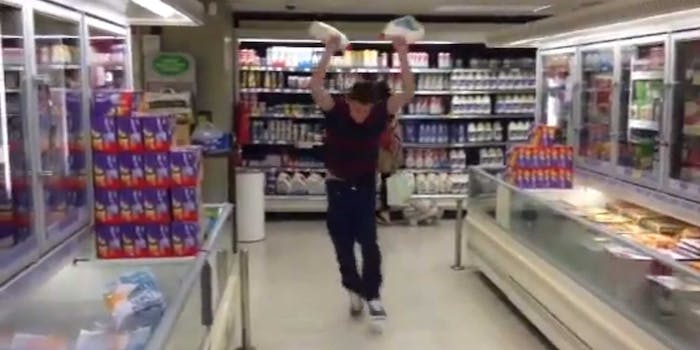 It looks like one gallon smasher will be crying over spilt milk after all.

Gallon smashing, the act of purposely dropping gallons of milk in a grocery store while making it look like an accident, has died down ever since the creators of the trend were arrested for the prank, but some are trying—and failing—to revive the meme.

The star of the video runs and drops the milk gallons like in every other gallon smash video, but he lands on his face instead.

“Aw, I think I broke my jaw,” he said as his friends laughed at him off camera.

Gallon smashing became an Internet meme in February after Omar, Zayd, and Faysal Khatib, two brothers and a cousin, posted a video to YouTube (which has since been made private).

The trend has since caused problems for local authorities, and the Khatibs were charged with seven counts of misdemeanor destruction of property and disorderly conduct each in March.