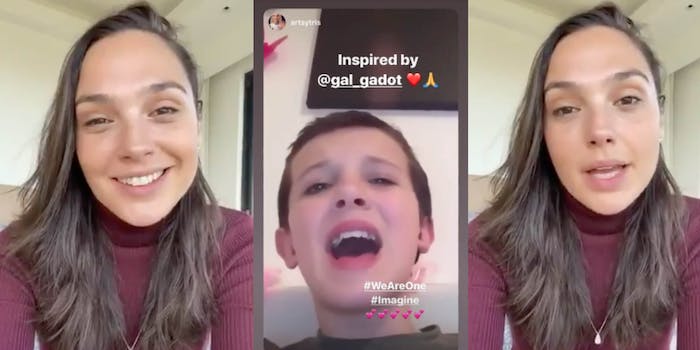 It was sent to Gadot as a joke.

The video of Gal Gadot and other celebrities singing John Lennon’s “Imagine” to quell fears surrounding the coronavirus (COVID-19) has given the internet one of its tops cringe moments of 2020 thus far.

And surprisingly, the cringe doesn’t stop at the video itself.

Gadot has been posting countless submissions to her Instagram Story of people singing “Imagine,” and some noticed Gadot’s story included a clip of actress Millie Bobby Brown. However, the video of the actress singing is actually not from this year.

Twitter user, @filmcupid who goes by the name Tris, told the Daily Dot she sent the video of Brown to Gadot as a joke, but she did not expect the Wonder Woman star to post it to her story.

“That video of Millie is a well-known meme, and there were jokes connecting the Gal Gadot video and the Millie video on my timeline,” said Tris, who opted to not share her last name. “What made me just go for it was when my friend tweeted ‘someone post this and tag Gal in this.’ …I’ve been a fan of Gal for around three years now so I was shocked. I really didn’t think she’d see it.”

The video Gadot posted of Brown singing is actually from over a year ago. A simple search on YouTube shows the video is from around the star’s early Stranger Things days.

People clearly found humor in the situation and were quick to collectively express laughs online.

Some even argued Brown should have been included in Gadot’s original video.

Brown hasn’t yet addressed the “Imagine” fiasco, but she did share with her followers why she’s self-isolating during the pandemic.

“#Istayhomefor my family, my nan (and) the vulnerable and elderly,” Brown said on Instagram.