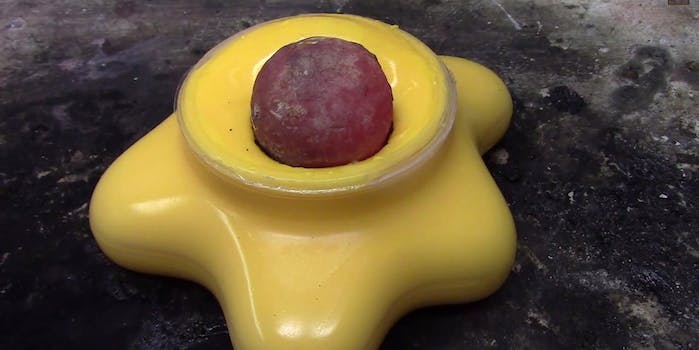 Not even searing metal can melt this ’90s Nickelodeon slime

Remember Gak? Turns out Nickelodeon made an indestructible toy.

The old adage goes that only two things could survive a nuclear disaster: cockroaches and Twinkies. But not so fast, after incredibly intrepid YouTubers did some experimentation it turns out there’s a third thing that’s proven it has indestructible capabilities.

What’s this mysterious object you ask? None other than quintessential ’90s toy, Gak. It’s turns out that the slimy substance, which was first introduced to the toy aisle in 1992 by Nickelodeon, is impervious to high heat. The YouTube channel carsandwater decided to conduct an experiment on the substance known for making children laugh with its fart noises.

After dropping a blistering hot ball of nickel onto the surfaces of the substance only minor whistling noises and searing noises could be heard. For over a minute the metal ball rests on the surface of the material, only to be removed moments later to show that while the bottom of the container had melted, the Gak remained intact.

This miraculous scientific discovery is as amazing as it is horrifying. Dear god, what were they making children’s toys out of in the ’90s? Are we all gonna grow third legs because we played with this stuff? I knew I should have never moved away from Play-Doh.