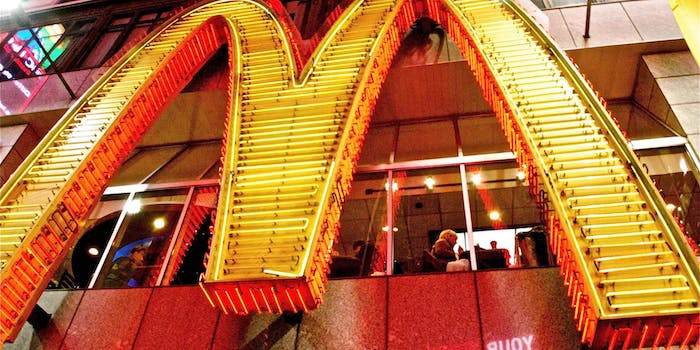 Is Missouri ready for this?

The city of St. Joseph, Missouri, has officially been put on the map by a new addition set to open in July.

McDonald‘s has announced that a franchise “of the future” is coming to St. Joe. It’s similar in scope to the hipster McD’s of Hong Kong that offered Chipotle-esque customization options without the E. coli upcharge. Because this is America, though, McDonald’s is offering one very unique thing at the stateside location: all-you-can-eat french fries.

Needless to say, people are seriously losing their shit over the announcement:

The real story is whatever the hell is going on in this lit-as-hell kid’s area. What is up with the yellow ceiling steering wheels and why did they sequester the kid in the wheelchair to the bottom corner of this McPlayPlace?

All will be revealed when the St. Joseph location opens over the summer. For now, start planning which drugs to take when you encounter this puzzling display of interactive play.

For those not tripping their balls off but actually hungry for something more than a few paltry potato sticks, the St. Joseph McDonald’s will offer a fully customizable burger you can craft via touchscreen. What a time to be alive.