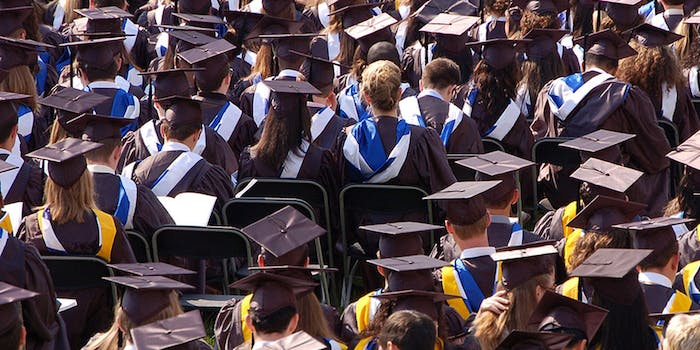 9 videos to watch on your phone during graduation

Get ready to relive a significant—yet excruciatingly boring—chapter of your life: graduation. Get your caps and gowns on, seniors.

Get ready to relive a significant—yet excruciatingly boring—chapter of your life: graduation. Get your mortarboard caps and gowns on, seniors.

From prestigious universities to rural preschools, educational institutions everywhere will be seeing the latest crop of graduates off to the next stage in their lives.

And those graduates will all be terminally bored.

Graduation ceremonies are always filled with camera-toting parents, endless processions, and boring speeches. As a result, you should seize the opportunity to liven up the proceedings, either intentionally or unintentionally. And thanks to YouTube, every funny speech, fall, and prank will be preserved for us all to enjoy.

Ralf Wyn, a self-described struggling comedian, was the valedictorian of his 2008 graduating class. He decided to send off his fellow graduates with a memorable speech comprised of 20% humor and 80% awkwardness. Included in his speech is the declaration that he is surrounded by the future “doctors, business leaders, and Wal*Mart executives” of society.

As we all know, anyone under the age of 20 cannot understand anything unless it is delivered to them in the form of a rap. Co-salutatorian Henry Tappen (who has the best rapper name ever) decided to make his entire address to the Class of 2004 one lengthy rap. Included in his rap is a verse detailing a tragic event from the class’ freshman year: “The sun came up but did not shine // as two towers disappeared from our skyline.”

In this video of a graduation ceremony held at an international school in the Philippines, we see why schools like to keep prom aspects, such as dancing, separate from graduation.

This video of a graduation in California could easily be titled “One Kid’s Bad Day.” The wind attacks him, the administrators take their sweet time awarding him his honors sash, and an attempt at a cartwheel becomes YouTube history.

A poor, unassuming speaker reads off names of some graduating attention whores at this 2009 University of Wisconsin ceremony.

After receiving his diploma and shaking the hands of everyone in succession, one graduate reveals his true identity.

One school out there has perfected the recipe for disaster: not only do they announce each graduate’s name, but they also read aloud a little tidbit of information on each one. One particular graduate decided to see how closely the speaker paid attention to such micro-speeches.

What fun would any crowded event be without a streaker? During this 2010 ceremony at Santa Rosa High School in California, one person takes it upon himself to crash the ceremony in nothing but a mask, shoes, and a backpack.

Finally, no matter what funny moments transpired at your own graduation, nothing can top what happened to Scott Levin-Gesundheit. He was flipped off… at Harvard… by actress Amy Poehler.