The unspeakable horror of funeral home reviews on Yelp

Read these and drop dead.

A while back, we took a look at bad reviews of wedding venues on Yelp, most of which turn into unseemly critiques of the happy couples tying the knot. But if you didn’t find these bitchy salvos against lame DJs and subpar buffets all that atrocious, fear not: Yelp has far darker corners, and today we turn to the darkest.

Behold, the horror of the one-star funeral home.

It makes sense that you’d want to warn potential customers away from a business that failed to accord your loved one a smattering of dignity as they departed this mortal coil, but there’s something intrinsically odd about going into such morbid detail in a public forum. It would seem, in fact, that people who go after crappy funeral homes online are staging some form of grief that had no other outlet. With no one else to turn to, they ask the Internet to empathize. 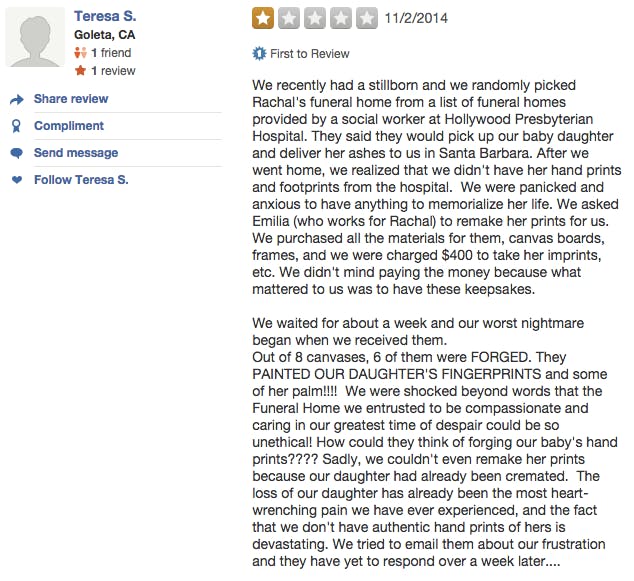 And yet, as pained and ghastly as some of these anecdotes are, is there anything a reader can do but laugh in horror? Between the Kafkaesque sense of bureaucracy, the heartless corner-cutting, and the plangent absurdity of death itself—a reality with which we all become intimately acquainted at some point—a rude affirmation of life can be the only response. 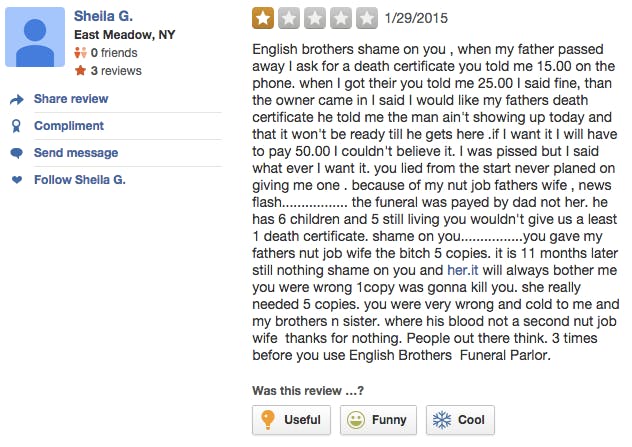 And as with the negative wedding venue reviews, what starts out as a screed against lackluster service, cockroaches, or shady billing practices quickly morphs into an exorcism of all that is amiss in one’s own heart, mind, and soul. Blame is spread like butter. Cruelties held in check at the dinner table spill forth. Why try to filter or disguise your rage? More than any other occasion, on that day when you’re obliged to spend thousands of dollars on a box in which to bury a blood relative and a stranger to read their obituary, you’re entitled to it.

But the true (if bleak) comedy to be derived from these tragic customer complaints lies in how they throw shade at every other vicious takedown on Yelp. Oh, you gave a Mexican restaurant one star because they forgot the extra guacamole? You panned a movie theater because someone shushed you during the previews? Well I am railing against a limo driver who sped away from the church to the cemetery and left half the family behind. 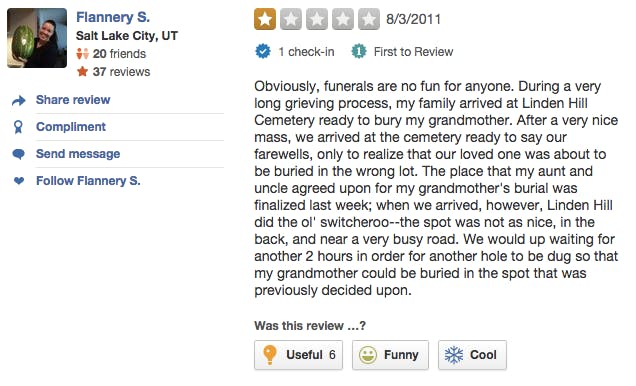 Sure, I’ll admit to having a macabre sense of humor. I can often find amusement where there should be none. I suppose the silver lining, if we can call it that, is that I’m not the only one. 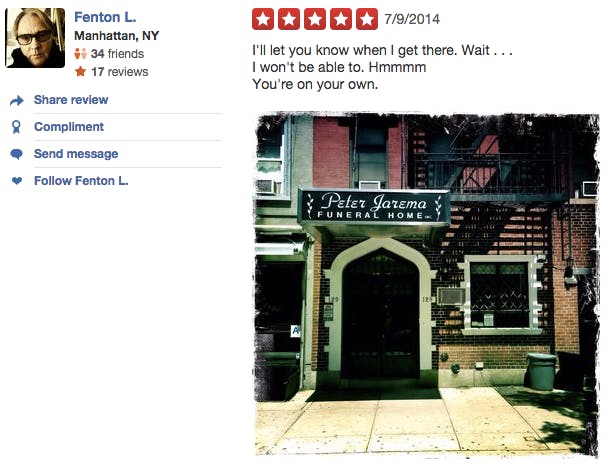 Photo via Wikimedia (CC BY 3.0) | Remix by Max Fleishman