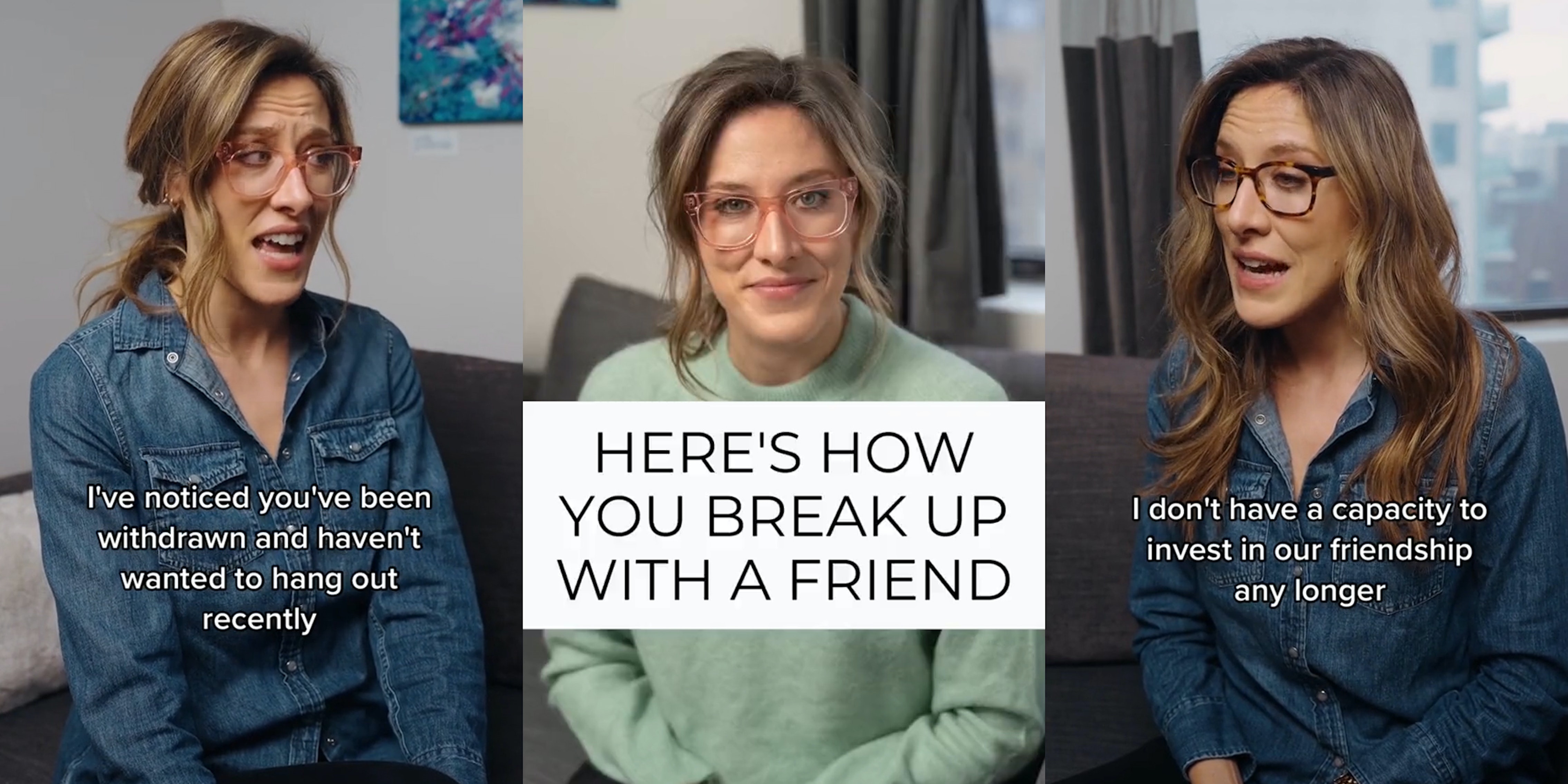 What was meant to be a suggestion for a specific situation was taken broadly.

There is no right way to end a friendship with someone, but if people’s reactions to a clinical psychologist’s suggestion are any indication, there might be—at least on some level—a wrong way.

A few days ago, Dr. Arianna Brandolini posted a skit on her TikTok titled “Here’s how you break up with a friend” with her followers. With Brandolini playing both characters, one asks the other why she hasn’t wanted to see them (and blames herself). The second person, differentiated by Brandolini wearing a different pair of glasses and her hair out of a ponytail, is calm as she explains why.

“I’ve treasured our season of friendship, but we’re moving in different directions in life,” she said as the second person. “I don’t have a capacity to invest in our friendship any longer.”

She also added that she’s been “reevaluating many areas of my life recently, including my ability to be a good friend to you.” The decision is framed as a way to set expectations with the other person, and while she’s sorry “if this feels painful and confusing,” she also wishes them well.

“i’m an abolitionist, but there should be a prison sentence for anyone who ends a friendship this way,” @diligenda tweeted.

For some, it read as a way of treating friends more like employees than people.

But it also evolved into several iterations of the same joke: Brandolini’s skit was eerily similar to the plot of The Banshees of Inisherin, Martin McDonagh’s Irish dark comedy that kicks off when Colm (Brendan Gleeson) wakes up one day and decides that he doesn’t want to be friends with Pádraic (Colin Farrell) anymore.

“Ok nevermind I’d rather employ the Banshees of Inisherin method than do this,” Sara Schaefer tweeted, referring to Colm’s threat to cut off a finger every time Pádraic continues to talk to him and the increasingly volatile direction the film goes.

Brandolini eventually made a follow-up video explaining the rationale behind her advice on how to break up a friendship. Noting that there isn’t a right or wrong way to end a friendship, she pointed out situations where having a plan of communication might be helpful. One example, which is the context of her original video, is when a friendship becomes toxic, you’ve already had several conversations with that person about it, and they’re not willing to change.

@answeranxiety Replying to @swiegs521 My last video got some of y’all fired up! I appreciate your feedback and responses and address some of them here. It’s normal and good for our friendships to shift and change throughout our life. Sometimes it’ll be a natural process, and sometimes we’ll intentionally stop making an effort to connect with those who no longer add value to our lives. Ending friendships does not always mean we have to have a conversation, and that’s OK! But there are times when having clear, brave communication is important. For example: when we’ve had multiple conversations about issues in the relationship, but no matter what we say or do, the person doesn’t want to listen or change. In that context, it’s OK to not over-explain yourself. You don’t have to expend emotional energy on someone who refuses to listen, change, or doesn’t understand. Friend breakups are almost always going to be painful and hard – there’s no perfect or painless way to go about it. What’s important is that you are kind, respectful, and clear about your boundaries. Remember that a 30-second TikTok video can’t capture the entire human experience! We are all beautifully complex. These are simply meant to give you some ideas to make your own 💫❤️ #mentalhealth #mentalhealthtips #friendships #toxicfriends ♬ original sound – Dr. Arianna Brandolini

“​​Friend breakups are almost always going to be painful and hard – there’s no perfect or painless way to go about it,” she wrote in the video’s caption. “What’s important is that you are kind, respectful, and clear about your boundaries. Remember that a 30-second TikTok video can’t capture the entire human experience! We are all beautifully complex. These are simply meant to give you some ideas to make your own.”