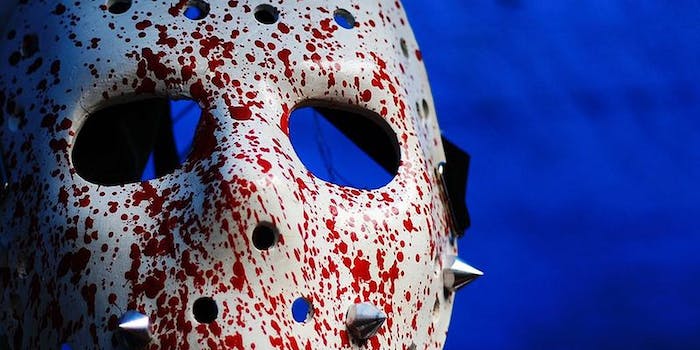 This Friday the 13th YouTube prank should not be legal

Some people might imagine what it'd be like to survive a horror film. This probably isn't what they had in mind.

Some people might imagine what it’d be like to survive a horror film. This probably isn’t what they had in mind.

Vitaly Zdorovetskiy, who once scared the crap out half of Miami by chasing people in a zombie costume, teamed up with Roman Atwood and Dennis Roady for their most dangerous prank yet.

In honor of Friday the 13th, the three pranksters dressed up as Jason Voorhees, the infamous horror film serial killer from the Friday the 13th series, and walked around the streets of Columbus, Ohio, with a chainsaw.

Zdorovetskiy reassured viewers that the chainsaw didn’t have any blades that could hurt anyone in the tool, but the local residents that they chased down the street didn’t know that. All they saw was a man in a mask with a chainsaw. And it was the middle of the night.

They might have recognized the mask if they had enough light from a street lamp or headlights. Even so, this Jason-looking prankster had a chainsaw. So they did the only thing that logically made sense: they ran like hell.

Unlike fellow YouTube pranksters Simple Pickup and LAHWF, both of which have gotten a lot of flak from viewers for making women feel uncomfortable in their videos, Zdorovetskiy, Atwood, and Roady didn’t target one specific group. There weren’t any children featured in the video, but otherwise all bets were off.

The prank is another YouTube success for Zdorovetskiy; in just one day, the video has more than 1 million views and over 96,000 likes. But not everyone is laughing.

According to Franklin County prosecutor Ron O’Brien, the prank’s victims could even file charges.

“That could constitute aggravated menacing because that says no person shall knowingly cause another person to believe that you are going to cause serious physical harm to them,” he told local stations ABC6 and FOX28.

Zdorovetskiy says otherwise. His attorney reviews all of his videos before he posts them online, and says that he’s doing nothing wrong or illegal.

“It’s hilarious, it’s not funny,” he told ABC6 and FOX28, noting that he made the video for Friday the 13th.

While he doesn’t live in Columbus, he plans to come back and film even more pranks. And when he does, letting the victims know it’s actually a prank might be a good start.