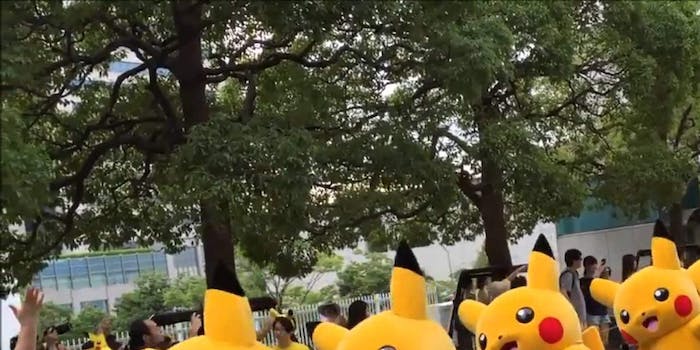 It's #FreeTheNipple all over again.

There’s a good reason why free condoms are readily accessible throughout New York City but free tampons are not: the prevention of sexually transmitted infections (STIs) and unintended pregnancies are far more important public health issues than the embarrassment of leaking through a pantyliner.

“In a city where we hand out free condoms, we should be making tampons more affordable and accessible,” said Queens City Councilwoman Julissa Ferreras, who is in the midst of drafting legislation proposing that free tampons be made available in junior high and high schools across New York City.

Although some women are in genuine need of low-cost ways to manage menstruation, the push for free, universal tampon availability not only hinges on an unsustainable model of bankrolling outdated products, it fails to prioritize those women who need these solutions the most.

The concept of free tampons isn’t new—the online campaign Free the Tampons reports that 86 percent of U.S. women aged 18-54 report that they’ve started their period unexpectedly without the supplies they need and that 78 percent of women had to improvise with a makeshift solution like rolled-up toilet paper.

Free the Tampons calls the issue a matter of “restroom inequality” and argues that “every bathroom outside the home” should offer free feminine hygiene products.

The push for free, universal tampon availability not only hinges on an unsustainable model of bankrolling outdated products, it fails to prioritize those women who need these solutions the most.

In her TED Talk, Nancy Kramer of Free the Tampons stated: “When a woman is confronted with an unexpected start to her period, it can create a huge overwhelming emotional ordeal because the consequences of a constant flow of fluid from our bodies can create a situation that is incredibly embarrassing and frankly humiliating.”

It’s this same stigma that seems to be behind Councilwoman Ferreras’ effort to put free tampons into public schools. Increasing the availability of tampons to prevent teenage girls from feeling ashamed is a thoughtful idea on the surface, one that certainly constitutes a reproductive health issue.

But issuing a simple cry for “free tampons” is an inelegant solution to a complex problem. At best, it’s an inferior way to provide women and girls with affordable ways to handle their periods. At worst, it’s a lazy, almost apolitical campaign that trades serious solutions for a catchy slogan.

The first problem with freeing the tampon has to do with the tampon itself: Why should we encourage the subsidization of an outdated product when there are cheaper and more sustainable solutions?

Last year, the Lily Cup Compact, a menstrual cup similar to the Diva or Sckoon cups, was successfully fundraised through Kickstarter. Up front, menstrual cups retail at $39.95, a hefty initial investment, yes, but one that will pay off during the span of a decade that your menstrual cup will last. Giving girls free menstrual cups or reusable pad kits—instead of that vile one-time-use period gift bag I received in the 4th grade—would be much more efficient than continuously providing them with a steady stream of rayon and cotton for life.

In a country that has been grossly unethusiastic about prioritizing women’s reproductive health, $40 a pop might seem pricey, but providing long-term-use sustainable products to those to fall under the low-income bracket is a lot cheaper than free tampons for everyone. Menstruation is not a looming unsolvable problem that requires thousands of dollars of tampons when you can pay for all of the products you need in 10 years for 40 dollars.

THINX, launched the same year as the Lily Cup Compact, is an alternative to menstrual cups, tampons, and pads that retails for around $30. This feminine hygiene and underwear dual threat consists of four layers, including anti-microbial material that is absorbent and guaranteed to be leak resistant. For each pair of underwear sold, THINX gives its partner, AFRIpads, funds to train women to sew and sell washable and reusable cloth pads, which are yet another viable alternative to tampons.

At best, it’s an inferior way to provide women and girls with affordable ways to handle their periods. At worst, it’s a lazy, almost apolitical campaign that trades serious solutions for a catchy slogan.

Party in My Pants is a business based in Wisconsin that makes an even less expensive alternative to tampons. Their products are leak-resistant, and each pad typically lasts up to five years (and they come in cool designs). One pad retails at $9.99, while a kit runs around $31.99. The website even includes a money saving calculator that gives a tailored estimate of how much you can save over the course of your lifetime (for me, that number is around $1,051.25).

Because the FDA classifies feminine hygiene products as medical devices and not personal care products, most major companies that manufacture these products are not required to list the harmful chemicals in tampons and pads. More than that, there is no independent testing done from third-party researchers for feminine hygiene products to make it onto drugstore shelves. They only required to be tested by the manufacturers themselves, which are much more inclined to cut corners on testing costs in order to readily get their products out on the market as quickly as possible.

Alongside the rare possibility of getting Toxic Shock Syndrome—likely a result of dioxins produced from viscose rayon—there is little data on the long-term effects of using these products in one of the most absorbent and sensitive areas of the body.

But the proposed NYC “free tampon” legislation does come from a supportive and sympathetic place: the desire to help girls through an often embarrassing but perfectly natural part of puberty. “It’s about young girls getting to take their own personal health into control and being able to feel that they have dignity in this process,” Councilwoman Ferreras said.

No argument can be made there: Girls deserve dignity. But in a U.S. high school, where teenagers can typically find a tampon or a pad from a friend or even the nurse’s office, are universal free tampons really the most effective way of addressing this problem?

Instead of putting energy into making tampons accessible in all public schools, we should be placing our focus on homeless shelters and jails where women are the most neglected. Women being held in prisons, who on average make 75 cents a day, should not have pay for a product that, when intentionally kept in shortage from groups of women, could easily become a public health issue.

The same idea applies to women who find themselves homeless; if they can’t afford housing, they can’t be expected to pay for menstrual products. Instead of freeing the tampon for all, we could follow the example of Sister Supply, a nonprofit that specifically seeks to provide homeless women with feminine hygiene products.

In the end, the call to “free the tampon” seems just as ineffective and surface-level as the popular 2014 Instagram hashtag #FreeTheNipple, a “real-life movement” that sought to end the censorship of women’s nipples on social media in an effort to counter the automatic sexualization of breasts. As Sarah Hampson of The Globe and Mail pointed out, the #FreeTheNipple campaign may “exacerbate the problem the protesters purport to be fighting” by leaning into its own sensationalism—just look at the poster for the IFC documentary it spawned.

Ferrara’s proposed legislation isn’t quite as frivolous as #FreeTheNipple, but the underlying sentiment is similar. These campaigns are well-intentioned, but they often become a fixation for a lazy form of feminism seeking to court mainstream favor.

It’s easy to shout “Free the Nipple” or “Free the Tampon” with no thought about what that means on a practical level. It’s harder to create sustainable menstrual solutions and to prioritize the people who experience the most need.

Corey Burke is an alumna of CUNY City College and works in reproductive justice in Atlanta. Her writing has been published on The Daily Dot. She spends her spare moments watching cute YouTube videos of whippets. You can tweet her @CoreyBurke.