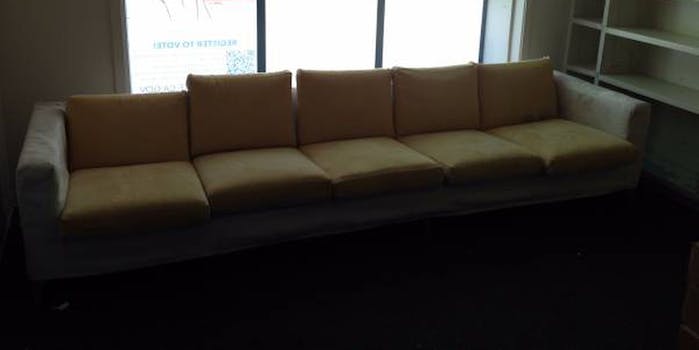 You can own this couch that Bernie Sanders maybe farted into

And it's free—just like college and healthcare should be.

It remains to be seen what impact a defeated Bernie Sanders may have on the Democratic National Convention in July or the party’s presidential ticket beyond. But for now, the populist candidate is closing up shop.

The campaign’s office in Oakland, California, is among the shuttered, posing an incredible opportunity for those partial to 2016 election memorabilia. The staffers’ couch appears to be unclaimed, and if you’re willing to cart it off, you can own a couch that Bernie farted into. 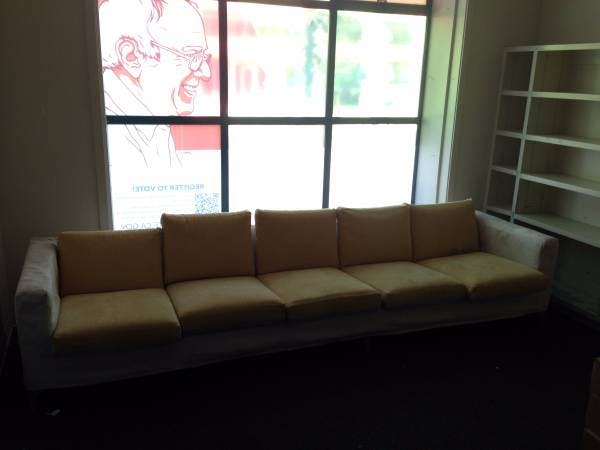 The revolution fights on, but the offices shut down…

Couch must be picked up Monday or Tuesday. Please email with the time you can pick it up, as well as certify that you have a vehicle that can haul a 10-foot couch (or friends to carry it away on foot). The quickest pick-up wins the couch and my gratitude.

(If someone just wants to volunteer to haul it to the dump instead of keep it, that’s also appreciated — it has to go somewhere quickly.)

Now, granted, the Craigslist ad doesn’t specifically state that Bernie farted on this couch. But dude’s a 74-year-old grandpa, and if my own grandpa taught me anything, it’s that grandpas tend to let it rip. Even assuming Bernie didn’t let one go while poring over voter registration data on this piece of furniture, there’s like a 50-50 chance Cornel West did.