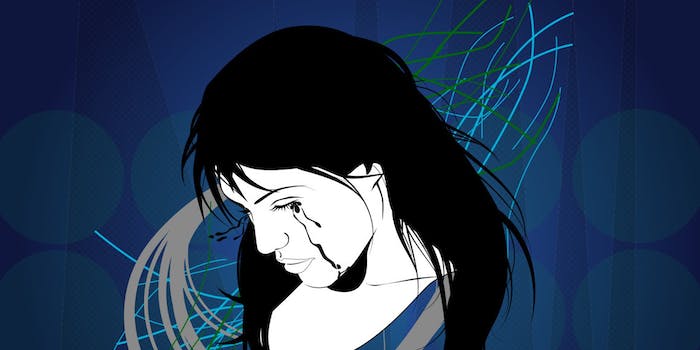 When it comes to Fox News, you should definitely swipe left.

It’s been a particularly tough year for American women: They’ve had their reproductive freedom stifled by a conservative Supreme Court, been persistently threatened online by a misogynist mob, and created the #YesAllWomen hashtag just to prove their feelings of being unsafe were warranted. It’s been a challenge for women to feel powerful.

That’s why it’s so beautifully ironic that the key to the 2014 midterm election rests in the collective manicured hand of young women, whose political allegiance swings strongly democratic. Conservatives know this. Fox News knows this. And after Tuesday’s episode of the uber-conservative network’s The Five, it’s no surprise young women feel alienated by the Grand Old Party.

A report released by Crossroads GPS and American Action Network in August revealed the results of a poll conducted among 800 registered female voters nationwide, which concluded that female voters view the GOP as “intolerant,” “lacking in compassion” and “stuck in the past.” A whopping 49 percent said they viewed Republicans unfavorably.

Per Politico, the groups who conducted the poll came up with a multi-faceted approach to woo the women after the grim results were in.

“The groups suggest a three-pronged approach to turning around their relationship with women. First, they suggest the GOP “neutralize the Democrats’” attack that Republicans don’t support fairness for women. They suggest Republican lawmakers criticize Democrats for “growing government programs that encourage dependency rather than opportunities to get ahead.” That message tested better than explaining that the GOP supports a number of policies that could help fairness for women.”

But Fox News’ The Five has a different approach.

On Tuesday’s edition of the show, which is like The View, except that the panelists all have the exact same point of view, the elusive young female voter came up. What ensued was a conversation that was an assault on young women’s competence, character, and basic rights, and the worst part of all is that the ring leader was female host Kimberly Guilfoyle.

Guilfoyle seems to relish in her role as the attractive, bold, relatively young, single conservative. When co-host Bob Beckel cites the statistic that married women are more likely than single women to vote Republican, Guilfoyle makes a buzzer sound, a la an incorrect answer on Family Feud, as if to say #NotAllSingleWomen.

Fellow co-host Greg Gutfeld goes on to make the astute observation that older women tend to vote Republican, which jibes with the findings of the Crossroads GPS and American Action Network report. “With age comes wisdom,” he quips. Gutfeld also says that women have “caught onto the big joke,” which, in his eyes, is that women find it “even more sexist” for the government to assume they need help by way of government programs.

Then, this: “It’s the same reason why young women on juries are not a good idea,” Guilfoyle chimes in. “They don’t get it. They’re not in that same life experience of paying the bills, doing the mortgage, kids, community, crime, education, health care. They’re, like, healthy, and hot, and running around without a care in the world.”

Beckel retorts, “What do you mean they shouldn’t get on juries? They have every right in the world.”

To which Guilfoyle responds. “I didn’t say they shouldn’t be, I just think excuse them so they can go back on Tinder or Match.com.”

This exchange causes a full range of emotion. But the prevailing feeling is sadness. How sad that this woman in a position of power chose to demean her own kind. How sad that she’s reduced young women to a group of people defined purely by their sexuality. How sad she doesn’t see their value in our society.

It’s doubtful that as a young Assistant D.A. in San Francisco that Guilfoyle would have appreciated being told to just keep being hot and let the big boys take care of things. She doesn’t even want young women to Say Yes to the Dress (or the Candidate), as suggested by the College Republican National Committee—she wants them to be the bridesmaids, lined up on the altar of politics with fake smiles plastered across their faces, pretending to know what’s going on.

In response to a poll, whose results were titled “Unmarried Women Support Democratic Candidates by 22 points in 12 Battleground States,” conservative villain Rush Limbaugh, joked, “If single women vote Democrat, then Republicans would be wise to start a dating service.” He and Guilfoyle can agree that’s all we care about.

In the past, Democrats have accused Republicans of waging a “War on Women,” and it seems that women like Guilfoyle are quick to provide the ammo. Amanda Marcotte at USA Today points out a “deep irony,” which is that Republicans think Democrats look at at women as single issue voters obsessed with paltry things like birth control. But in turn, they end up making women look incapable of caring about other things, much like the sentiment suggested by Guilfoyle.

“Republicans end up condescending to women even when trying to convince women it’s the other guy who is condescending,” Marcotte writes. “Women can see how Republicans portray them and their votes reflect it.”

Yet despite all the terrible PR, grim early numbers, and repeated infringements on women’s rights, a recent Associated Press-GfK poll told of good fortune for the Republicans in the upcoming midterm election. The numbers show that despite earlier forecasts, 44 percent of women would prefer the GOP take control of Congress vs. 42 percent for Democrats. The results weren’t broken down by age, but we can be reasonably certain a handful of these female voters are carefree, young, Tindering hotties.

So perhaps Kimberly Guilfoyle is hoping they’ll step away from their dating apps long enough to cast a ballot on November 4th for the party that has made it clear it doesn’t support the basic rights of her and her sisters. But when it comes to the Republican party, it’s more likely that young women will swipe left on election day.