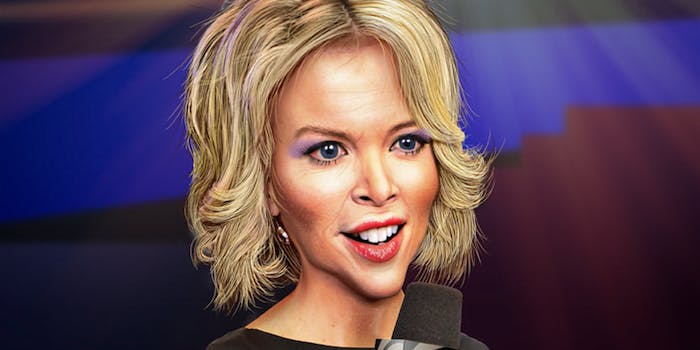 The one reason you should be watching Fox News

This is how you break the Internet.

For a while, it didn’t seem like anyone who wasn’t a card-carrying member of the GOP had a voice on Fox News, the network that is “fair and balanced,” so long as you agree with Rupert Murdoch. A 2012 survey by the Pew Research Center found that 60 percent of Fox News viewers were self-described conservatives, compared to 23 percent who identified as moderates and 10 percent who claimed to be liberal (the same figures ran 32-30-30 for CNN and 32-23-36 for MSNBC).

This probably explains why, at the beginning of Obama’s presidency, Americans found Fox News to be the “most ideological network.” Indeed, as recently as last year, Pew discovered that while no single news outlet dominates for liberals or moderates, conservatives overwhelmingly prefer Fox News—47 percent name the network as their primary source for information, with the runner up (local radio) clocking in at a measly 11 percent by comparison.

Yet despite the network’s well-established history of politics bias, Fox’s Megyn Kelly has been responsible for what are arguably the three most important political interviews of the past seven weeks.

Her golden streak started on April 9, when she sat down to interview Sen. Rand Paul (R-Ky.), a strong contender in the 2016 presidential race. Paul’s reputation for being arrogant with reporters was already well-known, and he had even attracted controversy for his seeming habit of being particularly put off when confronted by female journalists.

Consequently, when Kelly found herself being talked over after asking Paul about his stance on arming Syrian rebels, she insisted that he allow her to finish—and then pivoted to the question of his attitude problem.

Although Paul initially placed the blame on “both sides,” saying that nobody likes “yelling,” Kelly stood firm in holding him accountable, first by pointing out that “those women were not yelling at you.” In reference to his interview with CNBC’s Kelly Evans, she then bluntly asked him, “Do you regret shushing the reporter? Savannah Guthrie’s not exactly known for her aggressive unfairness.”

After Paul replied that his allegedly disrespectful reply to Guthrie happened because her question [on his foreign policy views] was “unfair,” he added that he “would rather not have contentious interviews. I’d rather do 30 minutes with Charlie Rose, laid back in a lazy boy chair.” Kelly’s response to this remarkable assertion was pitch perfect: “The question some people are asking about you is whether you’re ready for prime time because it’s only going to get worse.”

Kelly’s “prime time” treatment of the GOP ruling class continued earlier this month, when she interviewed another presidential aspirant, former Gov. Jeb Bush (R-Fla.), about his brother’s controversial war in Iraq. “Knowing what we know now,” she asked, “would you have authorized the invasion?”

His evasive reply deserves to be republished in full:

Kelly: You don’t think it was a mistake?

Bush: In retrospect the intelligence that everybody saw—that the world saw, not just the United States—was faulty. And in retrospect once we invaded and took out Saddam Hussein, we didn’t focus on security first.

From there, Bush went on to describe why America’s military campaign deteriorated after the invasion, acknowledging that mistakes were made but adding that he and his brother agreed on the subject. What he didn’t do was answer Kelly’s actual question—namely, whether he still would have supported the invasion based on the intelligence we have today, as opposed to the faulty information available in 2003.

Unfortunately for Bush, but fortunately for the rest of America, his stumbling reply became a centerpiece of the news cycle for the following week, culminating in Seth Meyers lampooning Bush’s seeming lack of preparation by joking on his nighttime talk show, “How did you blow that? Jeb, for real, considering your last name, how are you not ready for questions about Iraq? That’s like Rob Kardashian being caught off guard by questions about Kim. ‘I thought we were here to talk about my sock line!'”

Finally, there was Kelly’s deft deflation of Donald Trump on Wednesday. After drawing attention to a recent poll which found that 62 percent of Republicans and independents would “never consider” voting for him if he ran for president, Trump attempted to brush off the question by remarking that his negatives were only high “because they don’t think I’m running.”

As the interview continued, Trump attempted to burnish his qualifications as a potential political leader by comparing himself to General Douglas MacArthur and General George S. Patton, men who “don’t talk. They do.”

When she observed to Trump that “you haven’t been a military leader and you haven’t actually governed a state or been a lawmaker,” and he responded by citing his (in fact highly questionable) business record, Kelly asked if Americans should interpret his hiring of political staffers in Iowa, New Hampshire, and South Carolina (the first three GOP primary states in 2016) as a sign that he was “gearing up” to run for president.

After Trump affirmed that this was the case, Kelly openly implied that his lack of experience and popular support made his ambitions rather delusional: “You have to be a little [whistle] to run, don’t you?”

Kelly’s interviews with Paul, Bush, and Trump aren’t simply noteworthy because they involved a Fox News reporter embarrassing high-profile Republicans. They were also cases of a prominent TV personality acting like, dare I say it, a good journalist.

On each occasion, Kelly’s questions forced her subject to move away from his routine talking points and instead address important issues that lie at the center of each of their presidential ambitions: Paul’s troubling condescension toward prominent women, Bush’s relationship with his brother’s own presidential legacy, and Trump’s complete lack of political and military experience.

These weren’t “gotcha” questions or attempts to focus on meaningless hype. For better or worse, the three politicians talking to Kelly are all widely discussed as possible presidential candidates (with varying degrees of credibility, of course).

Consequently, it’s the job of all serious reporters to confront the major issues that voters would have about them, should their names appear on the national ballot next November. By virtue of how quickly Kelly’s interviews with them went viral, it’s clear that she did a good job of forcing them to be accountable for the ongoing concerns that exist about their candidacies.

The fact that Kelly happens to be a Fox News reporter just makes this development all the more remarkable.