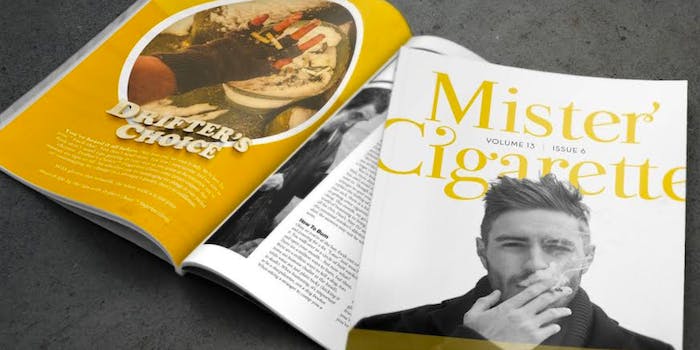 The weird, wild travels of ‘Fortunate Horse’ and ‘Mister Cigarette’

Have you seen this mag?

Imagine you’re at your doctor’s office waiting for an appointment. Among the stacks of InTouch and Men’s Health, there’s a magazine you’ve never seen before. You pick it up and page through it. Is what you’re looking at real? Is this doctor’s office? Is anything?

That could have been the fate of Fortunate Horse, a fake magazine created in 2014 by writers from media empires like The Onion, Adult Swim, and Saturday Night Live and placed in coffee shops and libraries around New York City. Now, the organization is looking to wreak even more havoc with Mister Cigarette, a lifestyle mag devoted to “awful men who smoke and love cigarettes.” A Kickstarter for Mister Cigarette has already surpassed its goal.

At the helm of this project is Taylor Moore, who also runs the Twitter account @chillsitch. He says the original idea for Fortunate Horse is “very much lost to history,” but that two improv comedy entities in NYC—Sketch Cram and Movie Cram, which produce sketch and feature films in a 24-hour span—influenced him to do a “magazine cram.” The first year, he says, they had nine to 10 people working on design and editorial. This year, they had five or six designers and 12 writers.

Fortunate Horse—which was paid for out of pocket and only yielded about 100 copies—featured an interview with Ginuwine, “horse-oscopes,” and gossip mag parodies. Moore explains it’s “about and for fortunate horses, and people who love fortunate horses. Maybe it’s a lucky horse, maybe it’s a rich horse. … At the end of the day, every horse is fortunate, because it’s a horse.”

Sadly, none of the writers were horses, but Moore says that was a big topic of debate among staff.

“Are we gonna have horses write a magazine?” 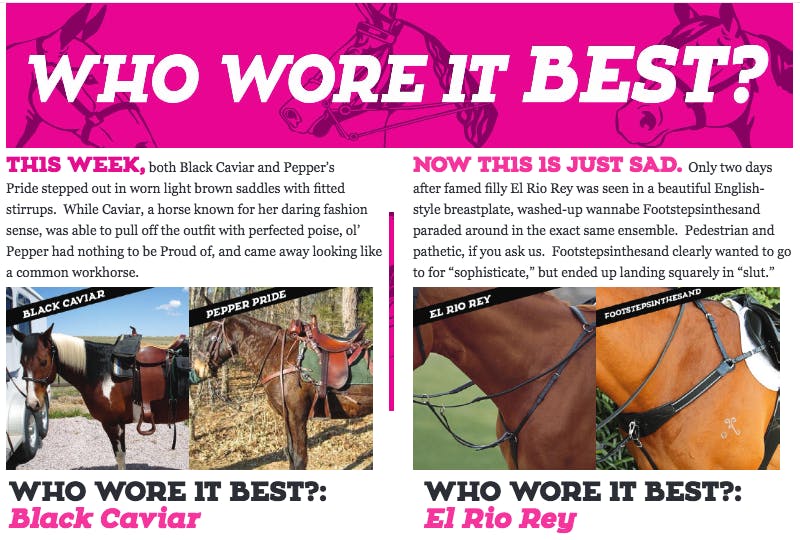 This issue is expected to go even further into the world, in their quest to “cover the face of the earth in stupid fake magazines.”

“When myself or another agent of the project would sneak a [Fortunate Horse] magazine into someplace, they would take a picture and send it to me. I put a lot of them up on fortunate.horse, where some of those ended up. But most of them we didn’t track.

“This is my favorite thing to do, and I can’t wait to do it with Mister Cigarette: Get on the train or bus, and put one in an empty seat across from you, right? And then someone will sit down and take it, and nine times out of 10, they’ll start reading this thing, and you get to be right across from them, seeing it for the first time, and they don’t know where it came from. They don’t know it has anything to do with you. … I would love sending magazines off into the world by putting them on a bus or a train.” 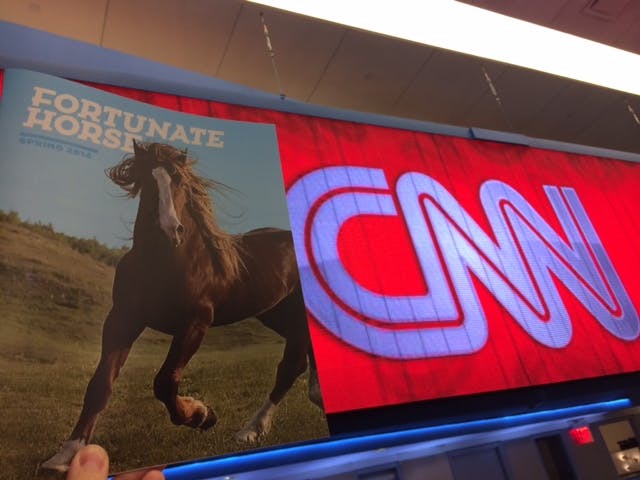 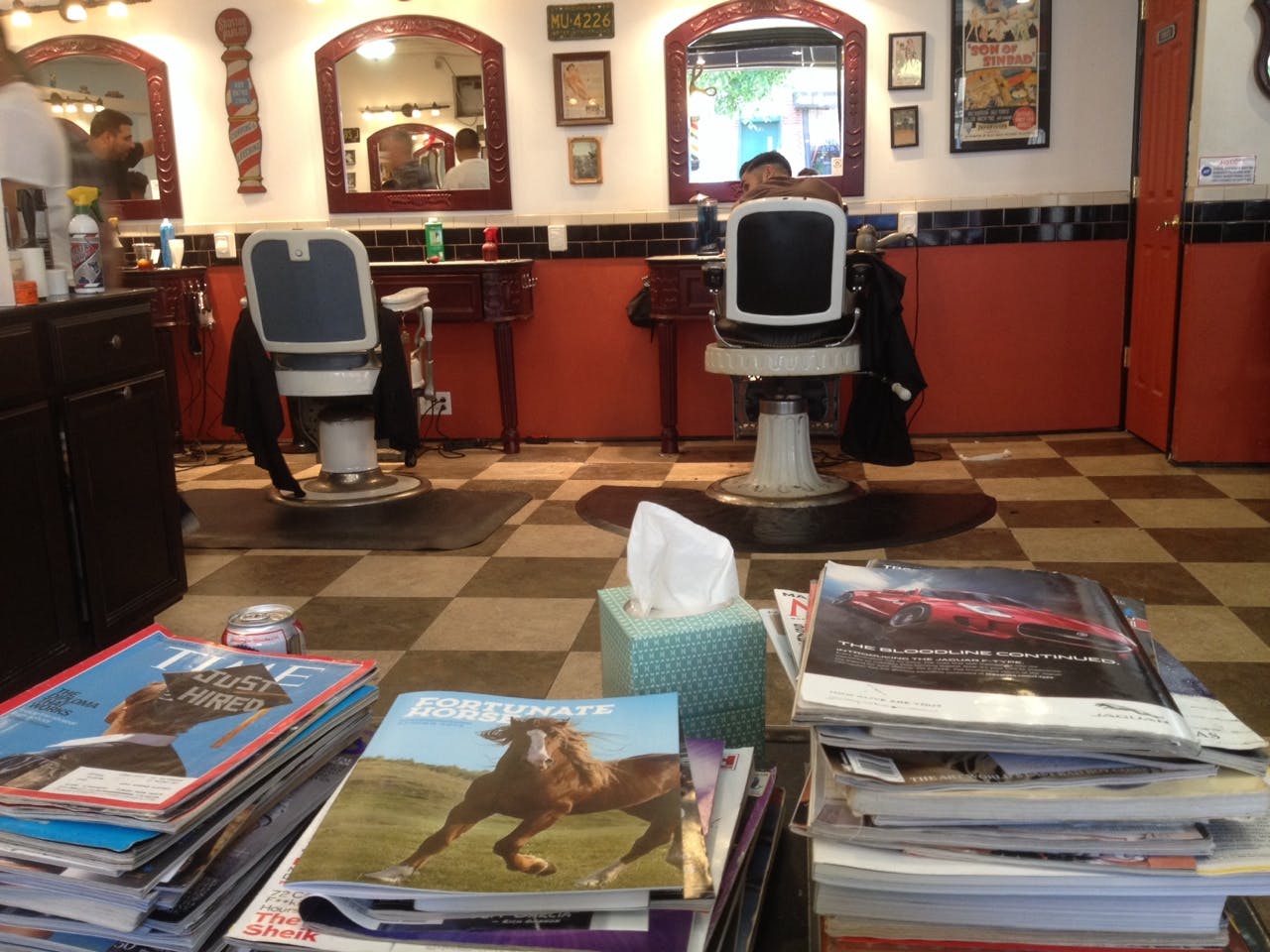 Moore cites comedians Nathan Fielder and Kurt Braunholer as inspiration. Fielder in particular has produced one of the weirdest shows on TV with Nathan for You, as well as some truly bizarre bits that blur the line between reality and prank.

But with their fledgling media empire, Moore and company are trying to leave something more tangible in the world. He says Kickstarter opened up the project to more eyes, and now people far outside New York City know about it. One supporter wants to sneak copies into the National Library of Latvia.

“We really wanted to make something that when you pick it up, you’re not quite sure if it’s real. So if you just find one of these magazines in the wild and pick it up, you’re kind of getting your foot into the door of this other world that is 30 percent weirder than ours.”