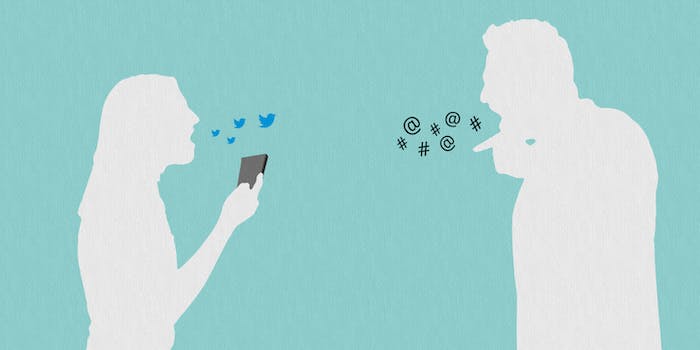 After Buzzfeed encouraged Twitter users to "follow a teen," teens struck back with the witty #followanadult hashtag.

What’s the only thing funnier than following a teen on Twitter? Following an adult, of course.

It started with #FollowATeen, prankster journalist David Thorpe’s 2012 hashtag that urged Twitter players to follow a teen, either on Twitter or in real life, and then report on their doings. In April, Buzzfeed editor Katie Notopoulos brought it back with gusto, and the hashtag has been making the rounds with hilarious entries:

My teen finally talked to him <3 #followateen

But not everyone was laughing—particularly, teens. There’s a thin line between affection and mockery, and with some news reports comparing them to pet Tamagotchis, it’s easy to see why some teens took offense to the attempt at inter-generational bonding.

Enter 17-year-old Tavi Gavinson, founder of Rookie magazine, a fount of wisdom and culture for teen girls. While others had floated the idea of #followanadult since April, it didn’t really take off until Gavinson and Rookie launched it officially, starting with an inaugural tweet by Rookie writer Hazel Cills:

My adult works in media and hates New York #followanadult

Directing their playful jab at “Growns” who think teens are dumb, Rookie encouraged others to play along and follow an adult.  The result? An endless hashtag of hilarity, as possibly unsuspecting adults have their moment in the spotlight.

Growns who think teen tweets are dumb (#followateen) should see their fellow adults’. Today we dare to #followanadult. Join us won’t you?

Judging from the tweets, it appears to be less like owning a Tamigotchi and more like playing Sim City: Yuppieville edition.

My adult had to get a tax extension this year, but he/she made it to Coachella the first weekend #FollowAnAdult

Of course, knowing how to find an Adult to follow is crucial. Pertinent Twitter search suggestions provided by Twitter users include “escrow,” “my Sebring,” “golf,” bill payments, and, of course, general ennui.  In addition, a perusal of the tag shows that Adults seem to like Harlem Shake videos, How I Met Your Mother, and Taylor Swift. Hmm. Could it be that Adults secretly yearn to be teens who can listen with unironic naive abandon to “Love Story”?

My “adult” is drinking a celebratory gin and tonic from a plastic cup with Harry Styles on it. #followanadult

I think nostalgia for younger days drove the #followateen hashtag’s popularity; teens are taking offense when there’s none to be taken.

All signs point to Yes.

As the hashtag gained popularity, it inevitably invoked jokes from confused in-betweeners unsure which “side” of the hashtag war they were on.

Unsure about how to participate in these #followanadult / #followateen shenanigans bc I’m not a girl, not yet a woman… #20yearsawkward

Awkwardly caught between not being a teen or a full fledged adult, I’ll just follow Steve Buscemi. @rookiemag #followanadult #followateen

Perhaps not so coincidentally, the theme for this month’s Rookie is “Attention.”  Ironically, through #followanadult and attempting to deflect attention away from teens, they may have gained more of it for themselves, and showed off the best of teen wit in the process.