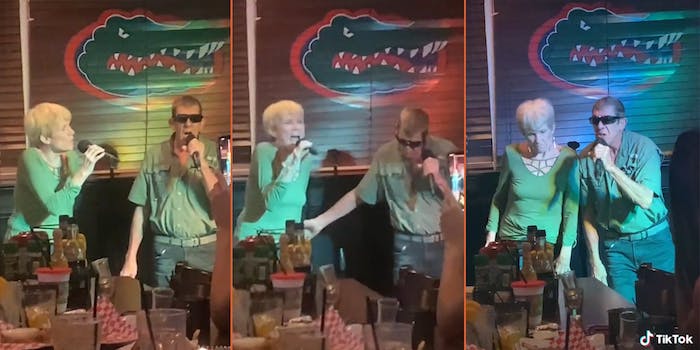 It's clear this is their song.

The footage was posted to TikTok by @indibimont, who appears to be filming at Panini’s Bar and Grill in Tampa. The video starts with an unnamed and unabashed older couple going in on “Dilemma,” and doing so with all the swag humanly possible.

That’s not all: this appears to be their song, meaning they’ve sang and worked it, over and over. Neither of them is looking at the screen. They are a whole bop, on the beat, not one lyric missed—the older gentleman nails all of Nelly’s bars and adlibs. Noticing the man’s attention to detail, @EboM81 commented, “Did anyone notice the man making the “cha & ahh” noises into the microphone while the lady was singing.”

So far, it doesn’t appear to be a potentially problematic situation. The karaoke couple is really out here, living their best lives doing duets.

One person commented on the karaoke couple, “This NEEDS to be viral. Protect them at all costs.” Another joked, “who’s memaw and pawpaw is this….they killing it….I feel they do this at the house alone.”

@jozz said it best: “THEY UNDERSTOOD THE WHOLLEEE ASSIGNMENT.”