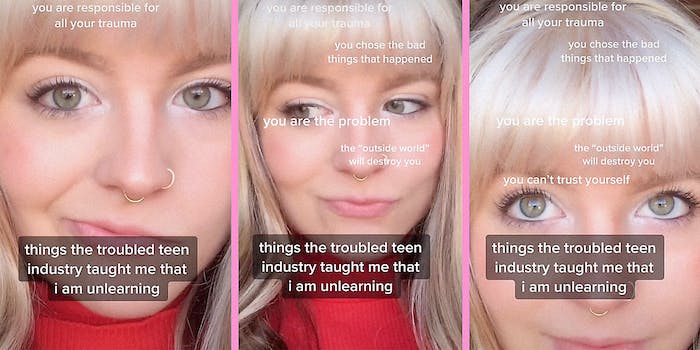 'I was forced to exist separately from my peers for nearly two weeks.'

America’s Troubled Teen industry is a multi-billion-dollar largely unregulated sector intended to “reform” teenagers with behavioral problems, or mental health issues, through abusive and unsafe methods. Now survivors of these institutions, backed by Paris Hilton and Bhad Bhabie—both former victims themselves—are “breaking code silence” en masse on TikTok, telling the truth about what they experienced in the hopes of preventing a future generation from being subjected to the same trauma.

What happens in these programs?

Troubled Teen institutions are known under several different names—such as wilderness therapy, which combines an outdoor setting with a behavior modification program. But they usually begin in the same way: “legal kidnapping,” where staff members abduct children from their beds in the middle of the night, refuse to tell them what’s happening, and transport them in handcuffs to the camp or school. Once there, they are often strip-searched and subjected to other humiliating treatment as part of their intake process. These experiences are traumatizing enough on their own, but the additional abuses experienced by these young people inflict further psychological harm.

Depending on the type of institution, the methods used to “reform” or “fix” the children in their care reportedly include solitary confinement, group humiliation, hours of intensive exercise in extreme temperatures without proper gear or sufficient water, the denial of food, sleep, and access to bathroom facilities, and the infliction of physical pain.

TikToker Dasogoloff, known as Dasha, told the Daily Dot that at the institution she attended when she was 14 years old, which she does not want to publicly name, she was frequently dragged by staff members from one building to another, leaving bruises on her arms, and forced “to sit and listen to my peers and staff berate me for incredibly insignificant things, and would often get called vile names for doing something such as rolling my eyes or daring to point out how screwed-up their treatment of residents is.”

Many of these practices were originally developed as part of a cult known as Synanon in the 1960s, and, according to many survivors and experts, amount to brainwashing; all designed to break the child down and produce a new, compliant child who meets parental expectations.

Dasha, now 20, also claimed that she was also punished with an “invisibility consequence” for objecting to the school’s methods, a means of subjecting a child to a situation very close to solitary confinement without actually having to enclose them in a cell; “I was forced to exist separately from my peers for nearly two weeks. I couldn’t look at or talk to anyone outside of staff, who could choose to ignore me if they so pleased, and any fellow resident caught looking at or talking to me would get in serious trouble.”

These methods are made even more horrific by the fact that many of the students admitted to programs like the one Dasha attended are sent there to “heal” from sexual trauma or serious mental health problems. One such survivor, TikTok user Rae, described being forced to submit to blindfolded massage in order to graduate from a facility, as well as being forced to take personal responsibility for everything that had been done to her. Another TikToker, Kyra, describes being given an extremely painful pelvic exam in front of multiple staff members.

Dasha, who was suffering from an eating disorder when she was enrolled in her school, described being forcibly and inappropriately medicated by the psychiatrist, causing her to gain a lot of weight. Calling the staff members’ treatment of her weight gain “food aversion therapy,” Dasha described an extremely inappropriate treatment program: “My therapist also refused to address my pre-existing eating disorder, completely sweeping that under the rug and instead berating me for gaining weight due to the medications she, and the psychiatrist, would force me to take. So, staff and my therapist would verbally and publicly shame and ridicule me for enjoying certain foods, all of which are part of a healthy person’s diet. I was also forced to eat all food with chopsticks for weeks to ‘help me’ lose weight.”

Despite information about these practices being readily available for years, there has been little public outcry or legislative attempts to mitigate the harm—even when students have died as a direct result of the treatment they’ve received. A significant number of former students have also raised sexual assault claims, and the denial of medical care, even when not resulting in fatalities, appears to be endemic. At least one program openly admitted to it and justified it as a reasonable part of the children’s therapy.

A key reason for this disregard, which can be seen in the responses to Bhad Bhabie when she spoke out about her own experiences in the industry, is the perception that the children sent to these places are “bad kids” who deserve whatever they get. Parents are frequently kept in the dark as to what their children are actually experiencing by these institutions, with camps and schools often refusing to allow their attendees unsupervised communication with their parents and punishing them for telling the truth. Some go one step further, doing what multiple survivors have described as grooming their parents, coaching them to expect specific “lies” from their children—”lies” that were really accurate descriptions of what was being done to them. And of course, all of this is expensive, costing parents thousands and even tens of thousands of dollars, with some academies declaring students ready for release when their parents ran out of money.

Survivors report a high suicide rate among their fellow graduates, with many others left unable to function, ending up homeless, addicted to drugs, or in other, terrible situations as a result of the trauma they’ve experienced.

The Breaking Code Silence movement has been around since 2019 but really started gaining steam with Paris Hilton’s documentary in 2020. With Bhad Bhabie’s recent call out of Dr. Phil for sending her and other children to Turn-About Ranch, and the accessibility and range provided by TikTok to survivors more and more people are discovering the truth about these institutions.

Changes to the Troubled Teen Industry

Some positive changes have already been made in response to Breaking Code Silence’s activism. Thanks in large part to Paris Hilton and Breaking Code Silence’s campaigning, Bill SB127 was passed in Utah where a significant number of these institutions are located. Named after the number that one of the schools assigned Hilton to use instead of her name, something they did to every student enrolled there, the bill bans the vast majority of the abusive practices—including humiliation, physical punishment, solitary confinement or isolation, and the denial of basic physical needs. Hilton has promised that she intends to take the bill to the federal level, ensuring that this kind of mistreatment of vulnerable children is eradicated for good.

Meanwhile, the survivors on TikTok and other social media apps are continuing to share their stories, doing their best to educate and provide support for other victims trying to recover from their experiences.