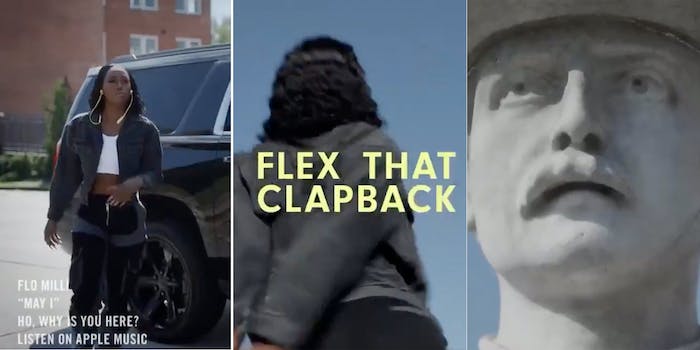 Flo Milli’s going the wrong kind of viral to start off 2021, as people are not feeling a Beats By Dre commercial that features the Alabama rapper dancing in front of a Confederate moment to one of her own songs.

The video was shared to Twitter as far back as November, whe wardrobe stylist Vincent Smith, who was looking to call attention to his work. The Flo Milli commercial appears to be part of a series of Beats Flex commercials; there are already YouTube versions of commercials featuring tennis star Naomi Osaka and rapper Cordae.

In a follow-up tweet, he observed, regarding the video, “This one was def for all the black girls in the south. Fuck all this Confederacy shit.”

But that’s not quite how people saw it on Twitter, especially after Jay Dior shared it on Sunday to open up a new viral era for the ad.

One person was reminded of this viral piece of protest performance art from the 2020 protests.

Another picked a similar protest moment and noted, “They really made Flo Milli do this in front of a Confederate statue.”

One had a laugh at “the statue fearing for its life.”

A number of others were reminded of the much-panned April 2017 Pepsi ad featuring Kylie Jenner in an attempt at selling racial harmony that didn’t quite land. One tweeted the commercial with the comment, “Same energy.”

Perhaps most perplexing, though, was the end of the video. After Flo Milli gets out of the SUV, sizes up the Confederate statue (which is giant), lets out of laugh, and dances to her “May I” for five seconds, the ad superimposes the words “Flex Your Clapback” over her still-dancing image.

One person observed, “I know that slogan only won out after ‘The clapbacks are on fleek’ or ‘It’s the clapbacks for me’ were vetoed.

Another, also feeling some Bad Marketing Meeting energy, said, “Whoever wrote ‘flex that clapback’ in the meetings for this commercial should be arrested. Flo Milli, I’m so sorry.”

Another response claimed that “they set her up with this one,” without noting specific who “they” was, adding, “Why tf would she randomly break out dancing in front of a Confederate statue and what does ‘flex that clap back’ mean?

A number of people suggested that Flo Milli should have destroyed the statue through the magic of CGI, with one suggesting, “How hard would it have been to have Flo Milli step out of a car, have her do a l’il dance dance shimmy and then stomp, CGI statue crumbles, ‘Flex on the traitors,'” before concluding, “Somebody hire me.”

One did suggest, though, that getting paid was a good enough reason to appear in a commercial like this one. “I can’t blame Flo Milli at all for that commercial,” he reasoned. “You offer me the right amount and Imma krump in front of a Robert E. Lee statue, too.”