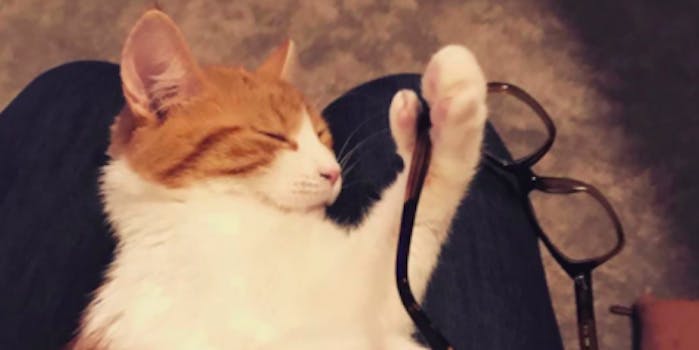 Paddles, the first cat of New Zealand, died Tuesday after being hit by a car near her home.

The “First Cat of New Zealand,” Paddles, is dead after being hit by a car near the prime minister’s home in Auckland, New Zealand.

Paddles was a beloved cat, known for having two opposable thumbs and being a social media star.

Hi, I'm Paddles and I am the First Cat of New Zealand. I have opposable thumbs, I'm purrty special. pic.twitter.com/MPkxdhWCRu

Paddles belonged to Prime Minister Jacinda Ardern, who took office in late October. Arden is the 40th prime minister of New Zealand and, at 37-years-old, she is also the youngest prime minister since 1856.

According to the New Zealand Herald, the driver of the car who hit the famous feline took the cat to the vet, hoping she was just unconscious. The vet declared the cat dead.

On Tuesday Ardern shared a Facebook post about her loss. “To anyone who has ever lost a pet, you’ll know how sad we feel,” Ardern wrote. “Paddles was much loved, and not just by us. Thanks for everyone’s thoughts.”

To anyone who has ever lost a pet, you'll know how sad we feel. Paddles was much loved, and not just by us. Thanks for…

Paddles was adopted from the Royal New Zealand Society for the Prevention of Cruelty to Animals (SPCA).

“Please be kind to the SPCA,” Ardern wrote on Facebook. “They found her before we did, and we will always be grateful for that.”

Following the death of Paddles, donations to the SPCA have been increasing.

Paddles’ Twitter mentions have been flooded with kind messages.

But the internet just won’t be the same without this charismatic feline.