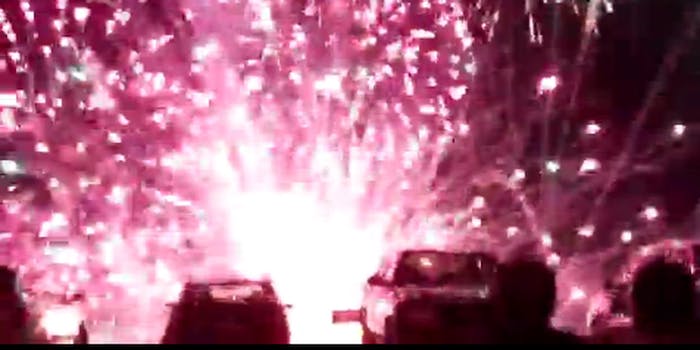 More than 10,000 had shown up at the park near Los Angeles to watch the display.

A fireworks display in Simi Valley, Calif. misfired into the crowd yesterday, sending dozens to local hospitals and leaving four with shrapnel or burn injuries.

“There was a big boom, everybody started running down the street, people were screaming,” Justice Allen, 17, of Simi Valley told the Los Angeles Times. “Everybody was just terrified. People hid in bushes.”

More than 10,000 people had filled up the The Rancho Santa Susana Community Park yesterday for the fireworks display, which began promptly at 9:20 pm. But within two minutes, something went wrong. “The fireworks were so close, you could see them on the ground,” Wynn said. “It never happens this way. People were screaming.”

Some of the victims were rushed to local hospitals. Luckily, the rest were treated at a makeshift clinic on site. Four suffered moderate to severe injuries. The local bomb squad was called in to diffuse the remainder of the fireworks. Watch the terrifying moment the gunpowder rockets turned towards the crowd below.