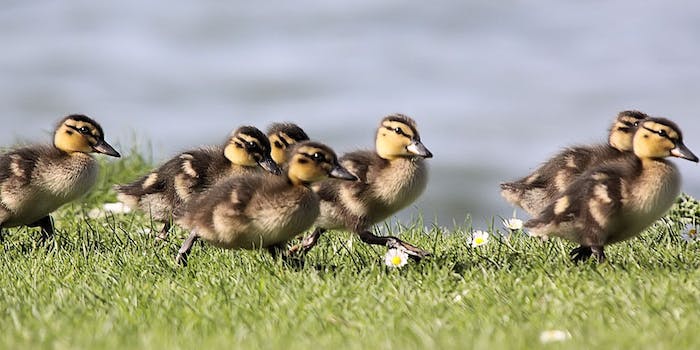 This man deserves a medal.

In a case that’s part “what the duck” and part “wow that was a really good idea,” a Louisiana firefighter used a duck-call ringtone to help save a gaggle of six ducklings from a storm drain.

It took Firefighter Cody Knecht about an hour and a half to catch the first four baby ducks. The remaining two mini-mallards needed another hour of calming down before emerging; perhaps they knew the truth about that duck call.

The squad of swimmers was later reunited with their mother.

It’s unclear how all six of the ducklings got into the storm drain. Was it a case of “follow the leader” gone wrong after the lead duck made a wrong decision? Or was a mastermind mallard trying to get rid of its fellow duck brethren, only to also get caught in the drain? We’ll leave all the duck drama to Duck Dynasty.

Given how long it took to get the ducklings out, perhaps the firefighter should’ve tried using a Donald Duck YouTube video to get them mobilized.