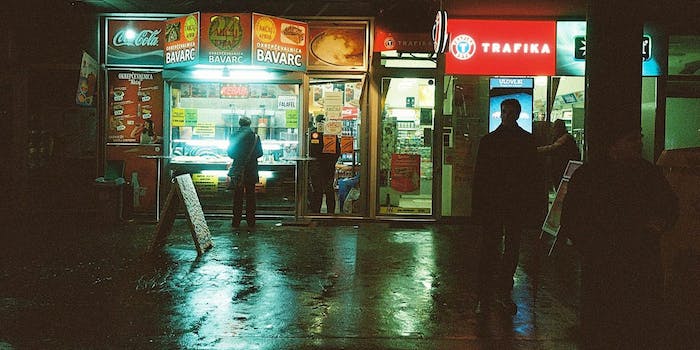 Find My iPhone or the triumph of the American Spirit

Have you ever stalked a cab? Not pacing from street corner to street corner like a junkie in search of a lost high, trying to hail any taxi that passes. Instead watching the movements of a vehicle you’re not in unfold in real time, zigzagging through your city and making constellations out of every pinging point.

This is what happens when you put Find My iPhone to use for its natural, intended purpose.

The app was put to the test the night of July 4, Independence Day—a whole 4,400 miles from the nation’s capital—after my friend Cameron lost his phone following a rager in the forests of Slovenia.

Contrary to popular American belief, Slovenia is a country and its people have a stellar sense of humor. A handful of their residents ironically celebrate the Fourth of July and have been doing so for four years running. The summer’s “Return of Freedom” party featured a bunch of DJs changing their names to twisted political tropes (the one-two punch of DJ Hands Against The Wall and DJ Spread ‘Em was absolutely electric). The hotdogs were OK. As per translation: “Freedom DJs on the wheels of freedom will take care of the thunder as you have not heard since Hurricane Katrina!” 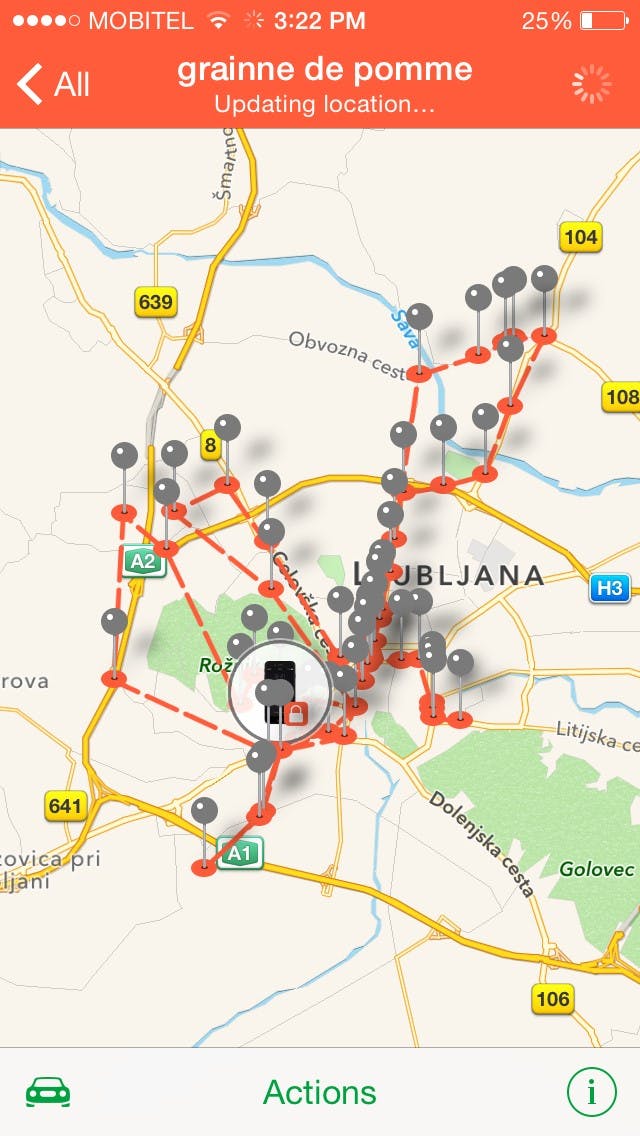 Cameron, myself, and dozens of red-blooded Americans rode our own wheels of freedom (whichever taxi company didn’t mind off-roading in the middle of nowhere) to the outskirts of Ljubljana, Slovenia, as basically the affirmative action attendees of the party. What’s more authentically American that people who were born there? Probably apple pie but whatever. There was a bonfire, bar, swing set, and a fistfight. Typical USA-style horseplay. Despite the more trifling moments, Cameron’s phone didn’t lose itself to the evening until he and four others caught a cab back into Ljubljana, where we’ve been staying for the month. The driver was somehow able to navigate to the middle of nowhere to get them yet apparently lost his sense of direction as soon as they entered the cab, thus Cameron’s phone became de facto GPS.

The phone was tracking the journey and helping provide directions when it somehow ended up stuck in the back seat of the cab for the night. By the time Cameron noticed, the driver had pulled away and no amount of waving him down would stop him. Judging by the numerous fares he undoubtedly picked up, it was a profitable evening so dude just didn’t have the time. Cameron pinged the phone a good 40-plus times from the device leaving his possession shortly after 2am until he went to bed around 4am.

All the while I stayed at the party, listening in on the other side of a conversation Cameron was having with the guy who called for cabs in the first place, quickly realizing that calling to negotiate a “lost phone” call to a Slovenian cab company is nearly impossible if you don’t speak the language. This shouldn’t have been surprising. The cab I hailed to get to the party had a driver who spoke next to no English yet inexplicably knew all the words to that Puff Daddy song about Biggie Smalls, “I’ll Be Missing You.” What started as a silent lip-sync quickly evolved into some passionate rhyming from a man old enough to be my grandfather but with pretty fresh prison tattoos.

The phone stopped doing much of anything in the wee hours of the morning. It hit low battery and then some, Cameron looked up its address the following afternoon, and we took a bus over.

We traveled maybe a mile and a half away to a quaint apartment complex with a tiny parking lot and, out of the many cars parked, just one cab. That was the one.

I began frantically writing down any identifying information I could find, from plate number to make and model of the cab, snapping photos of the permit affixed to the taxi’s light-up sign like I was racing against the restraining order clock. Cameron used the help of locals to communicate with the cab company; folks who quickly have become our friends and not just because they think fireworks are cool too. The night before, Cameron had tried and failed to get the front desk guy where we were staying to help a brother out and call the cab company to no avail.

He didn’t know English. He probably knew “I’ll be Missing You,” though.

It turns out the driver was an outstanding human being and had already reported the phone anyway. Through contacting a local who contacted the cab company who had the cab driver’s information on file, we were able to track down the exact apartment number he was in, ring his buzzer, and receive a phone that had pretty much just died. The driver got a hefty reward, mostly because Cameron forgot how many euros he pulled out. The iPhone was rescued, and we got an adventure story that speaks to the triumph of the American spirit.

Photo via Dino Kužnik/Flickr (CC BY 2.0)