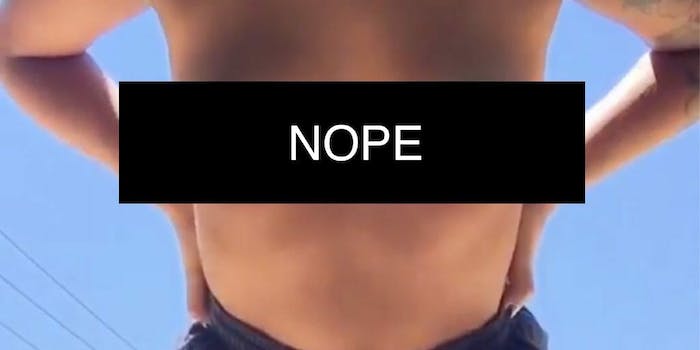 This woman has fidget spinners on her nipples, because it’s 2017

"Fidgetiddies" have the internet in a whirl.

The nipple spinners are called “Fidgetiddies,” and they were created by a woman named Manuela, who goes by @caritadepincel on social media.

“hi everyone i have been working on something that absolutely no one asked for,” she wrote on Instagram, along with a video where she takes her new invention for a spin.

She’s selling Fidgetiddies for an unspecified price via her Twitter direct messages, but it might be easier to just make your own. Here’s the tutorial video for the most 2017 thing that has ever existed. All you need is a little Velcro and a lot of self-confidence.

Some have suggested that Manuela should trademark Fidgetiddies and go into business for herself, before a company does what companies always do to creative people on the internet and copies her idea without credit or payment. Fidget spinner nipples may be pretty obvious, but Manuela is the first to go viral with an easy tutorial.

Girl you better actually trademark those things. Get your money

Congrats to this young fidget entrepreneur on her great and terrible invention. Strip clubs may never be the same.