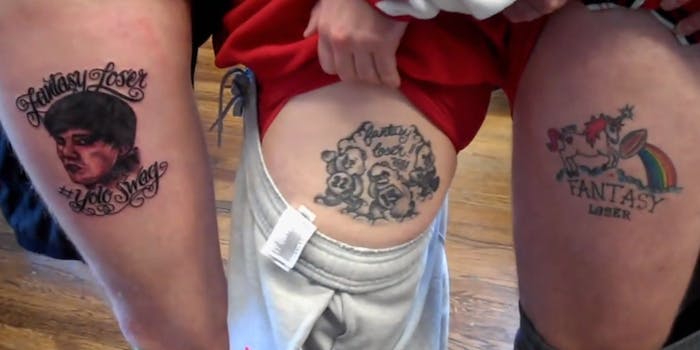 In this fantasy football league, bros give each other the worst tattoos

For one fantasy football league, "revenge is a dish best served with a tattoo."

For one fantasy football league, “revenge is a dish best served with a tattoo.”

What started out as a joke between friends turned into the Tattoo League, a 10-person fantasy football league in Nebraska that raises the stakes of the competition to the next level: the person who finishes in last place has to get a tattoo designed by the winner.

When the first loser, Spud Mann, lost the first year, he had to get a tattoo of a unicorn, which set the tone of any future tattoos. In this league, there are no real winners—only very sore losers.

“It was horrifying,” Adam, last year’s loser, said. “The entire time I was getting tattooed I was thinking how much I hate my friends, why am I even friends with these guys, why am I in this league.”