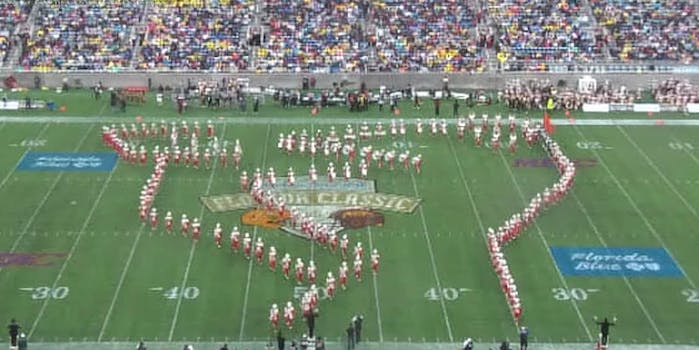 This band's performance may be the best ever. But that's none of our business.

Florida A&M University has a legendary marching band. Yet for the past few years the attention on it has been mostly negative. This past weekend, however, the FAMU band got everyone talking about its incredible moving formations. Most notable was the band forming a Kermit the Frog meme, “But that’s none of my business” formation.

On Saturday, the Marching 100—the official name of the Florida A&M University marching band—took to the field during halftime of the Florida Classic football game between FAMU and Bethune-Cookman University. With the game scoreless at halftime, the Marching 100 sought to inject some life into the struggling Rattlers and their fans by putting on one of the best marching band shows you’ll see anywhere in the country. Among other formations the band performed the Love Rollercoaster and The Nae Nae Dance, a crowd favorite.

But it was its “Kermit drinking tea” formation (seen at the 3:00 mark) that really got people talking. The formation was executed flawlessly and the meme is immediately recognizable. It’s hard to make out from the audio, but the announcer probably made a “…but that’s none of my business” joke at Bethune-Cookman’s expense.

The Florida A&M football team ended up losing the Florida Classic in overtime on a pretty crazy two-point conversion, but there’s no question that its marching band won the halftime showdown with this performance.

Screengrab via Eight To Five Entertainment/YouTube