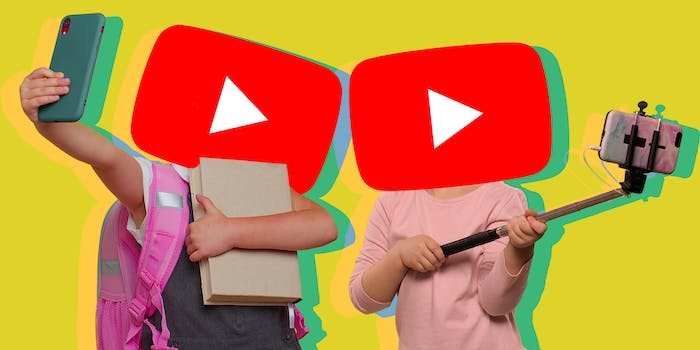 What’s behind the fall of the family vlogging genre?

'YouTube inherently pushes content to the extreme and when children are involved, this can lead to controversy.'

In the past year, we have truly seen the fall of the family vlogger empire. What was once considered a wholesome and lucrative endeavor on YouTube has been stained with controversies, allegations, and revelations that could not be remedied with even the most heartfelt of apology videos. Channels which were one considered leaders in the family vlogging genre, such as The ACE Family and SacconeJolys, both announced their intentions to shut up shop, taking their kids and their paychecks off the internet for good—and it doesn’t seem like many will miss them.

The fatigue around family vloggers is the result of changing trends and increased concern over kids being shown on the internet. It’s easy to forget that the internet is still in its fetal stages, and that less than 20 years ago, when the internet was a largely-unregulated free-for-all, the idea of YouTubers and family vloggers were a huge novelty. These days, however, the content creator industry is more cutthroat and competitive than ever. This bloated industry, coupled with our enhanced understanding about the dangers of the internet, has led us to look at the world of family vlogging more critically.

The ACE Family, headed by Austin McBroom, saw a spectacular decline in popularity after several competitors from the YouTubers vs. TikTokers boxing match—including the likes of Bryce Hall and Tayler Holder—revealed that they had not yet been paid for their appearance. This was the latest in a long line of scandals involving “scamming” and mistreatment accusations against McBroom, his wife Catherine, and the businesses built off the back of their YouTube empire.

But it wasn’t just the decline of the ACE Family that had people falling out of love with the family vlogging genre. Jordan Cheyenne, a single parent and fairly successful “mommy vlogger” went viral for all the wrong reasons in 2021, as an unedited portion of a vlog about her dead dog revealed her coaching her seemingly-distressed young son into posing for a sad thumbnail for the vlog. “Look like you’re crying,” she said at one point in the video. “I am crying,” the child said in response.

The fallout from this scandal led to a lot of concern about how family vlogging puts pressure on children and how much they can consent to sharing their lives online: and this concern reached fever pitch this year with the SacconeJoly family.

Jonathan Joly, who, along with wife Anna, was previously close with former YouTube royalty like Zoella, found himself on the receiving end of the internet’s ire due to the way he handled the transition of his 8-year-old daughter, Edie. While followers are supportive of her, many are concerned with just how much of Edie’s journey is being plastered over the internet. As well as having little privacy, many critics asked whether Edie was old enough to consent to such intimate details about her transition being put out and monetized on her family’s YouTube channel, and whether this may force her into becoming a spokesperson for the childhood trans community.

This concern snowballed into wide distaste on the app, with TikTok tags like #sacconejoly shooting up to over 65 million views as countless creators took to the app to make their feelings on the family clear. One such TikToker, who has made several viral videos critiquing the family, is Samantha, who posts under the handle TheFoleyThree.

“No amount of money should be worth treating your children like props,” she told Passionfruit. “One of the biggest issues people have with the SacconeJolys is how often they post completely inappropriate content of their children that makes the average person uncomfortable, leading to safeguarding concerns.” She added that, in her opinion, “the SacconeJolys cross the line between cute family moments (that should be private) and inappropriate content that often caters to a disturbing audience.”

The final straw seemed to be when Jonathan Joly had a virtual interview with influencer Maddy Lucy Dann, during which she reiterated widespread concerns about whether Edie consents to having every step of her transition journey broadcast all over the internet. The interview went viral when, despite Dann frequently saying to Joly that she wasn’t comfortable speaking to his children, Joly got one of his children to fetch Edie to “say hi to Daddy’s friend.” The criticism around Joly then reached a tipping point. Soon after, in April, he briefly took down his YouTube videos, claiming he had outgrown family vlogging and that he was unsure if he should have put his children on the platform. At the time of writing, the SacconeJoly YouTube channel, which still contains videos of Edie, has been restored.

What’s behind the family vlogging fatigue?

The criticism against the SacconeJolys, ACE Family, and Jordan Cheyenne has been presented to many other family vlogging channels before them. Minors being presented as spectacles is arguably part of the genre’s DNA. But when it comes to challenging this behavior, why now? Why are people especially tired of this content in 2022? According to Dr. Carla Marie Manly, a clinical psychologist, it’s because the genre has now become stale and oversaturated.

“Family vloggers were once a novelty on YouTube,” she explained. “But with the substantial increase in forums for posting videos about family life, the competition for subscribers and views in general has increased.”

As a result of this, Dr. Manly told Passionfruit that “what was once captivating and unique has become more familiar and even droll,” meaning that there is “less interest” in the family vlogging genre compared to five, or even 10 years ago. She added, “From a psychological perspective this makes sense given that the human brain quickly becomes acclimated to anything that is ubiquitous and therefore less interesting.”

Building upon Dr. Manly’s observations, media psychologist Dr. Pamela Rutledge added that family vloggers were initially popular because, as well as being a novelty, they “provided a voyeuristic glimpse into others’ lives” as well as showcasing “authentic experiences of parenting [which helped to] normalize the ups and downs of the experience.” But the novelty around family vloggers have worn off, and viewers are getting more skeptical about their impact.

“We are at the point now where family vlogs are not new,” she explained, adding that “information about the artificiality of family vlogs as well as what borders on parental cruelty and child abuse to create content” has also become more widespread. This means, according to Dr. Rutledge, that the authenticity which used to be fundamental to family vloggers has now faded.

“If the value of something rests on its authenticity, but that is in doubt, the content offers no value other than amusement,” she said.

Meanwhile, digital culture expert and Digivoid founder Jamie Cohen, Ph. D., told Passionfruit that the fall of the family vlogging genre is a byproduct of “the internet’s growing era of accountability.” Because there is so much competition in the genre, especially on YouTube, “there’s only so much day-to-day content to share before audiences get bored.” This, according to Cohen, has led to parents “upping the ante” in terms of content.

“YouTube inherently pushes content to the extreme and when children are involved, this can lead to controversy,” Cohen added. But  “the line between fun and abuse is subjective.”

This doesn’t mean that every family vlogger is abusing their child. Rather, in the age of hyper-accountability viewers are extra critical when it comes to decisions regarding children.

“Audiences often feel they know better than creators,” Cohen explained. “And in this era of accountability, audiences are far more aware of child exploitation, especially on commodified platforms that are known for enabling bad behavior.”

As pointed out by Dr. Jenna Drenten, associate professor in marketing at the Quinlan School of Business, another reason for this heightened level of concern about child exploitation is because the kids of family vloggers have little legal protection.

“If a child is part of a family vlog and their entire life is potentially recorded for the internet, where does everyday childhood stop and monetizable labor begin?” she asked.

While there are employment regulations in place for child actors or musicians—a child actor’s working hours, for example, must not exceed 8 hours each day—there are no such laws for the children of family vloggers. The same goes in terms of financial benefit. While child entertainers’ earnings are protected by Coogan’s Law, the same can’t be said for the children of family vloggers.

But despite this heightened level of concern, Dr. Drenten doesn’t think the family vlogging genre is dead for good: it’s just changed. While YouTube used to be “synonymous with vlogging,” Dr. Drenten told Passionfruit that “the ecosystem of social media platforms have changed,” with various other platforms like Instagram, Snapchat, and TikTok among others also becoming a hub for video content among creators. There’s also the fact that, according to Dr Drenten, “it’s not enough for ‘family’ alone to be a content niche” anymore.

“The growth of influencer culture has shifted how influencer families brand themselves,” she explained. “Today, the popular families are ones that build their brand on something else—with commercialization baked in.”

On TikTok, for example, many creators with children often rely on an extra “niche” to get viewers hooked, like raising their child vegan, going traveling with their baby as part of the #VanLife craze, or raising their family on a farm.

“Social media still holds a lot of value in giving so-called nontraditional families a platform to share their stories,” Dr Drenten explained. “But one thing that hasn’t changed—and probably never will—is that parenting is fodder for criticism.”