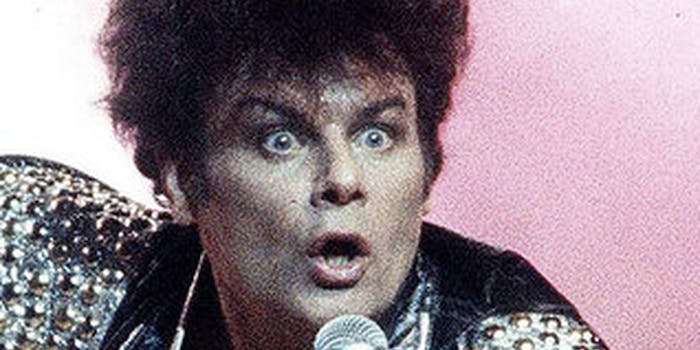 As part of a "social experiment," a Twitter user managed to attract 20,000 followers and become a global trending topic under the guise of Gary Glitter, a glam rocker and convicted pedophile.

The account holder behind @OfficialGlitter revealed his account to be “a social experiment to highlight Internet safety and morality” last weekend. He set up the (now defunct) Tumblr account, glitterontwitter.tumblr.com, to explain his reasoning. Since we can’t access the original post, here’s part of his lengthy explanation, as quoted by one blogger:

@OfficialGlitter was a fake account. But imagine if it hadn’t have been. I’ve got almost 20,000 followers now. That’s 20,000 people I can send private and direct messages to. That’s hundreds of thousands of photos I can view. Imagine for a second, I set up a profile saying I was a “Justin Bieber Fan Club”. How many young girls would follow me? I hazard a guess at a few thousand. The scary thing is that most parents wouldn’t bat an eye-lid at their child following a profile that seems to promote their favourite singer.

The impostor, who identified himself only as “Ben,” said he was “deeply disgusted” with Glitter’s actions. He wanted to demonstrate how easily pedophiles could reach potential victims using digital means. As quoted in Digital Journal, Ben continued:

I hope this has highlighted the flaws with human rights protecting the rights of registered sex offenders whilst also putting our children at risk by allowing (what could have been) a real sex offender on twitter. If sex offenders are so limited in the “real world”, why are there no laws prohibiting what they can and can’t do on in the “digital” world. Something must be done.

There is no legal barrier to prevent a convicted pedophile like Glitter to run a Twitter account. While Twitter has a zero tolerance policy toward the promotion of child pornography, it does not prevent sex offenders from joining the site, though it have an age requirement of being at least 13.

In his blog post, Ben called out Twitter users who made light of Glitter’s past. The account became the butt of many jokes about child abuse, which is obviously not a laughing matter.

“Disgusted to see Gary Glitter on Twitter – he’s supposed to be babysitting for us tonight.#unreliablebabysitters,” wrote comedian @mrsstephenfry.

Meanwhile, he thanked the users who sent him abusive tweets.

“Although legally, there is nothing you could have done to remove Glitter, it’s very satisfying to know that a majority of Britain still has their morals intact,” he wrote.

On Jan. 19, Ben began tweeting under the pretense of being the British celebrity and convicted felon. Tweets included news of an upcoming comeback and world tour. By Friday, “Gary Glitter” was a global trending topic and the account itself had more than 18,000 followers.

However, after revealing that the account was a fake, his follower count dropped to around 100 users. Since then, Ben deleted his Tumblr and most of @OfficialGlitter’s tweets revealing the account to be fake, a move that’s already led to a slight increase in followers.

In one deleted tweet, which we found on Topsy, Ben encouraged people to email him feedback of the experiment at internetsafetyexperiment@hotmail.co.uk. After what we’ve learned about Internet safety though, we won’t be emailing strangers any time soon.