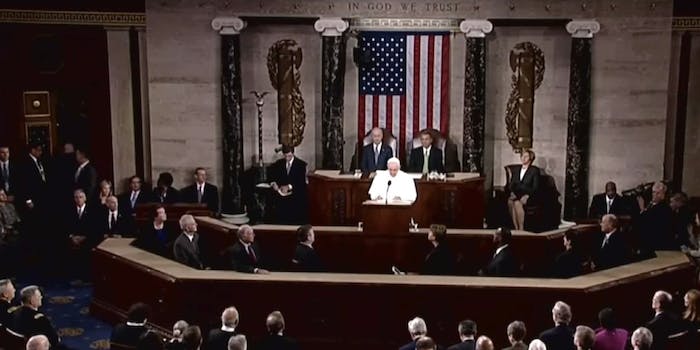 We fact-checked everything Pope Francis said to Congress

Just how far did he bend the truth?

For those of you who don’t know, the pope is a very important man, and it’s not just because he’s old and white. This week, Pope Francis made history by visiting to the United States. Imagine how chill it would be to make history just by flying to another country!

In a speech some would deem “fire” or “lit,” the pope today addressed U.S. Congress. As the No. 1 Catholic news source on the Internet, the Daily Dot was thrilled. In fact, the whole editorial crew went to Washington, D.C., to see the Holy Father in person. Despite my commitment to the Catholic faith, I was left behind at the office due to my impure Jewish blood and given one simple task: fact-check the pope’s speech:

“We know that no religion is immune from forms of individual delusion or ideological extremism. This means that we must be especially attentive to every type of fundamentalism, whether religious or of any other kind.”

While I can’t be sure whom the pope is IRL subtweeting in this part of his speech, ol’ Francis over here is completely correct. A religion that, say, appoints one old white dude as its leader, claiming that he can communicate directly with God and he is infallible, is not immune to individual delusion or ideological extremism. For the pope’s words are holy words; they are God’s words. They are true. Amen.

“But there is another temptation which we must especially guard against: the simplistic reductionism which sees only good or evil; or, if you will, the righteous and sinners. The contemporary world, with its open wounds which affect so many of our brothers and sisters, demands that we confront every form of polarization which would divide it into these two camps.”

The pope acknowledges that it’s reductive and harmful to look at the world in a black-and-white way, so even if he also believes that by altering their bodies, transgender folks are “against God the Creator” because they don’t “recognize the order of creation,” the pope, in his infallible glory, is right on both accounts. Amen.

“I think of the political history of the United States, where democracy is deeply rooted in the mind of the American people… I am happy that America continues to be, for many, a land of ‘dreams.’ Dreams which lead to action, to participation, to commitment. Dreams which awaken what is deepest and truest in the life of a people.”

Ahhh, yes, America, land of the free, where all people have equal rights! For the word of the pope is the word of God, my God, the Lord, Amen and hallelujah, hosanna in the highest.

“Politics is, instead, an expression of our compelling need to live as one, in order to build as one the greatest common good: that of a community which sacrifices particular interests in order to share, in justice and peace, its goods, its interests, its social life. I do not underestimate the difficulty that this involves, but I encourage you in this effort.”

The pope asserts that politics is ultimately about common good. Guess that means that Donald Trump’s beef with Rosie O’Donnell has deeper meaning and isn’t just about petty name-calling. Phewf! I was starting to lose my faith in humanity.

Wow, actually? Turns out this speech is really long. Good thing this is easiest fact-checking job I’ve ever had, considering that whole papal infallibility thing: Every single word Pope Francis utters is categorically true, so I’m not gonna sweat it too much. Just too bad I only get paid in indulgences!

Peace be with you all.