Many Facebook users are rallying behind the stark imagery and text of this photo, which has been shared more than 1,000 times.

“This is not public property,” reads the handwritten sign on a woman’s naked stomach. “Decisions regarding this are mine–and only mine–to make.”

The striking image of unverified origin has been passed around for years online. Much like the “I am ObamaCare” photo from late 2011, the post has found new life in light of recent legislation and has been shared by the page administer for the Facebook group Occupy Democracy Resources.

Several states have recently passed or considered a new law that requires women who want abortions to have a sonogram and listen to a baby’s heart before the procedure. A provision of the law in some states is that in cases where a baby’s heartbeat is too faint to be heard by a conventional, [external] sonogram, doctors have to confirm the baby’s heartbeat by sticking a probe in the woman’s vagina.

In a similar controversy, many women and male supporters of women’s reproductive rights were outraged that Rush Limbaugh called a woman a “slut” for wanting birth control to be part of her health care plan and refused to back down from his words until he lost multiple sponsors.

Unsurprisingly, this photo has sparked debate among Facebook users.

“This naked, vulnerable, Botticelli belly is such a beautiful and appropriate icon for women’s reproductive rights,” wrote Jennifer Robertson.

“Abortion should ONLY be legal if it is the product of convicted rape,” wrote Zachary Collins, capturing the other side of the debate. “Other than that, it is murder. Plain and simple.” 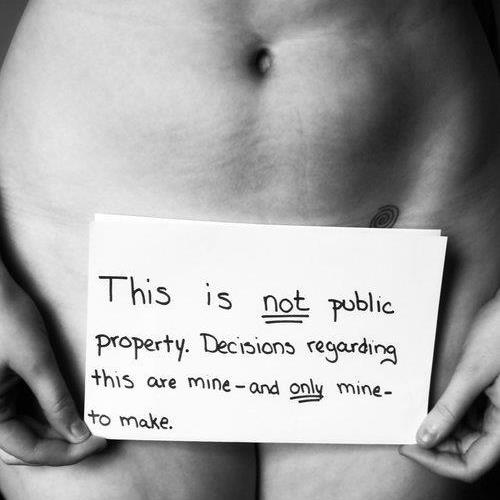